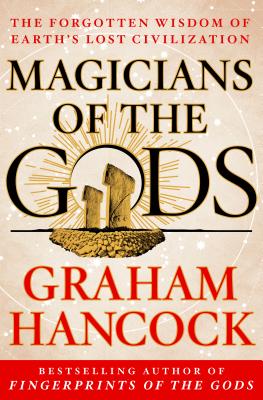 Magicians of the Gods

Sequel to the International Bestseller Fingerprints of the Gods

Graham Hancock's multi-million bestseller Fingerprints of the Gods remains an astonishing, deeply controversial, wide-ranging investigation of the mysteries of our past and the evidence for Earth's lost civilization. Twenty years on, Hancock returns with the sequel to his seminal work filled with completely new, scientific and archaeological evidence, which has only recently come to light...

Near the end of the last Ice Age 12,800 years ago, a giant comet that had entered the solar system from deep space thousands of years earlier, broke into multiple fragments. Some of these struck the Earth causing a global cataclysm on a scale unseen since the extinction of the dinosaurs. At least eight of the fragments hit the North American ice cap, while further fragments hit the northern European ice cap. The impacts, from comet fragments a mile wide approaching at more than 60,000 miles an hour, generated huge amounts of heat which instantly liquidized millions of square kilometers of ice, destabilizing the Earth's crust and causing the global Deluge that is remembered in myths all around the world. A second series of impacts, equally devastating, causing further cataclysmic flooding, occurred 11,600 years ago, the exact date that Plato gives for the destruction and submergence of Atlantis.

The evidence revealed in this book shows beyond reasonable doubt that an advanced civilization that flourished during the Ice Age was destroyed in the global cataclysms between 12,800 and 11,600 years ago. But there were survivors - known to later cultures by names such as 'the Sages', 'the Magicians', 'the Shining Ones', and 'the Mystery Teachers of Heaven'. They travelled the world in their great ships doing all in their power to keep the spark of civilization burning. They settled at key locations - Gobekli Tepe in Turkey, Baalbek in the Lebanon, Giza in Egypt, ancient Sumer, Mexico, Peru and across the Pacific where a huge pyramid has recently been discovered in Indonesia. Everywhere they went these 'Magicians of the Gods' brought with them the memory of a time when mankind had fallen out of harmony with the universe and paid a heavy price. A memory and a warning to the future...

For the comet that wrought such destruction between 12,800 and 11,600 years may not be done with us yet. Astronomers believe that a 20-mile wide 'dark' fragment of the original giant comet remains hidden within its debris stream and threatens the Earth. An astronomical message encoded at Gobekli Tepe, and in the Sphinx and the pyramids of Egypt,warns that the 'Great Return' will occur in our time...


Praise For Magicians of the Gods: Sequel to the International Bestseller Fingerprints of the Gods…

"Author Graham Hancock's new book Magicians of the Gods is a triumph of investigation, intuition and interpretation. Deeply immersed in an ocean of new scientific and archaeological discoveries and yet prescient enough to conceive of humanity's mysterious development and humble place in the universe, Hancock weaves a multidisciplinary thread that connects oral traditions, the mystery of place and time with contemporary scientific observations and evidence....A masterpiece of penitentiary distillation, intuitive speculation and multidisciplinary perspective, Magicians of the Gods comes with the highest recommendation." - New Dawn on Magicians of the Gods

“Ingenious.” —Kirkus Reviews on Magicians of the Gods

"Magicians of the Gods schools the attentive reader in exotic locales and colourful (often thwarted) characters, dusty ancient knowledge and pristine contemporary science and theory. Hancock's passionate, detailed prose transports us around the globe and across millennia in an accessible and direct manner.: - New Dawn on Magicians of the Gods

"Hancock does a magnificent job of proving beyond reasonable doubt that an advanced civilization, which flourished during the Ice Age, was destroyed in global cataclysms between 12,800 and 11,600 years ago." —Atlantis Rising on Magicians of the Gods

“Intriguing and entertaining and sturdy enough to give a long pause for thought.” —Kirkus Reviews on Fingerprints of the Gods

"I do so recommend this book. Hancock is an enchanting writer, and such a curious and thoughtful and intuitive investigator of the mysteries." - Anne Rice, author of Interview with a Vampire

GRAHAM HANCOCK is the author of the major international non-fiction bestsellers including The Sign and the Seal and Fingerprints of the Gods. His books have sold more than seven million copies worldwide and have been translated into thirty languages. His public lectures, radio and TV appearances, including TV series, Quest For The Lost Civilization and Flooded Kingdoms of the Ice Age, as well as his strong presence on the internet, have put his ideas before audiences of tens of millions. He resides in the UK.
Loading...
or support indie stores by buying on