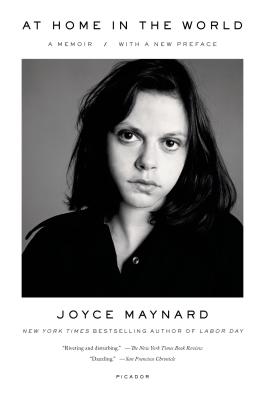 At Home in the World

When it was first published in 1998, At Home in the World set off a furor in the literary world and beyond. Joyce Maynard's memoir broke a silence concerning her relationship—at age eighteen—with J.D. Salinger, the famously reclusive author of The Catcher in the Rye, then age fifty-three, who had read a story she wrote for The New York Times in her freshman year of college and sent her a letter that changed her life. Reviewers called her book "shameless" and "powerful" and its author was simultaneously reviled and cheered.

With what some have viewed as shocking honesty, Maynard explores her coming of age in an alcoholic family, her mother's dream to mold her into a writer, her self-imposed exile from the world of her peers when she left Yale to live with Salinger, and her struggle to reclaim her sense of self in the crushing aftermath of his dismissal of her not long after her nineteenth birthday. A quarter of a century later—having become a writer, survived the end of her marriage and the deaths of her parents, and with an eighteen-year-old daughter of her own—Maynard pays a visit to the man who broke her heart. The story she tells—of the girl she was and the woman she became—is at once devastating, inspiring, and triumphant.


Praise For At Home in the World: A Memoir…

“Even Salinger loyalists may feel compelled to reexamine their idol.” —Glamour

Joyce Maynard was born and raised in New Hampshire.  She is the author of several books, including To Die For, Where Love Goes, Domestic Affairs, Baby Talk, and her memoir Looking Back, which she wrote at the age of eighteen.  Joyce Maynard has written for many national publications, including The New York Times Magazine, Parenting and Good Housekeeping.  She lives in Mill Valley, California, with her three children.
Loading...
or support indie stores by buying on