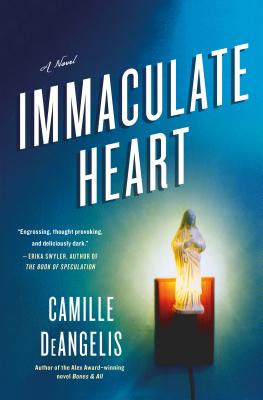 When visiting Ballymorris in Ireland for a funeral, a down-on-his-luck American reporter learns of a story that happened only months after his last visit many years before. A group of four teenagers, three of whom are family friends, claimed to have been visited by the Virgin Mary. Almost twenty years later, one of them denies it ever happened, another has left the small town, never to be heard from again, another has become a nun, and the fourth has been locked away in a psychiatric ward for many years. At the time, news of the visitation brought much wealth and tourism to this dreary Irish town, but as the years went by, and after the Pope refused to officially recognize it as a true Marian Apparition, what had been seen as a miracle began to feel like a curse, and this reporter believes there is more to the story than the townspeople are letting on.

As he seeks out each of the four stories, each begins to take a different and sinister turn. Surrounded by secrecy and confusion, the journalist must decide how much of what he's uncovering is the truth, how much of it is lies, and much he can trust the four witnesses-one of whom he's become infatuated with-or for that matter, himself.

Immaculate Heart is a novel where nothing is certain and everything should be questioned. Camille DeAngelis will leave you guessing what is real and what is only just a vision.


Praise For Immaculate Heart: A Novel…

"A beautifully disturbing look into the nature of truth, sin, and the pursuit of redemption. Immaculate Heart is engrossing, thought-provoking, and deliciously dark." -Erika Swyler, author of The Book of Speculation

"Camille DeAngelis's Immaculate Heart gets under your skin so subtly, I'm left to marvel at the affect. The Rashomon-esque treatment of an investigation into a twenty-year-old sighting of the Virgin Mary in rural Ireland by a group of teens is as wonderfully dark and mysterious as it is intelligent. And maybe best of all, Immaculate Heart is compulsively readable." -Paul Tremblay, author of A Head Full of Ghosts and Disappearance at Devil's Rock

Camille DeAngelis is the author of the novels Mary Modern and Petty Magic and a first-edition guidebook, Moon Ireland. A graduate of NYU and the National University of Ireland, Galway, Camille currently lives in Boston. She is a vegan.
Loading...
or
Not Currently Available for Direct Purchase