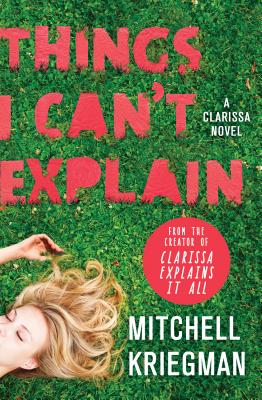 A complete re-imagining of the 1990s television hit Clarissa Explains it All as 20-something Clarissa tries to navigate the unemployment line, mompreneurs and the collision of two people in love.

She was a smart, snappy, light-hearted girl who knew it all at fourteen and let television audiences everywhere know it. Now a woman in her late twenties, her searching blue eyes are more serious, but mostly amused by the people around her. The gap-toothed smile that made her seem younger than she really was is gone, but she still lightens up the room. Her unpredictable wardrobe rocks just like when she was a kid, but her fashion sense has evolved and it makes men and women turn their heads.

After leaving high school early, Clarissa interned at the Daily Post while attending night school. At the ripe old age of twenty- two she had it made - her own journalism beat (fashion, gender politics and crime), an affordable apartment in FiDi and a livable wage. She was so totally ahead of the game. Ah, those were the days! All three of them. Remember the Stock Market Crash of 08? Remember when people actually bought newspapers?

All of Clarissa's charming obsessions, charts, graphs, and superstitions have survived into adulthood, but they've evolved into an ever-greater need to claw the world back under control. Her mid-twenties crisis has left her with a whole set of things she can't explain: an ex-boyfriend turned stalker, her parents' divorce, a micro relationship with the cute coffee guy, java addiction, "To-Flue Glue," and then there's Sam. Where's Sam anyway?

Things I Can't Explain is about knowing it all in your teens and then feeling like you know nothing in your twenties. It is an entertaining and must-read sequel to all fans of Mitchell Kriegman's Nickelodeon TV show, Clarissa Explains It All.


Praise For Things I Can't Explain: A Clarissa Novel…

"With plenty of references to satisfy fans of the show, Kriegman's novel will also appeal to readers seeking a fun, breezy read with a lovable leading lady." —Booklist

“Things I Can't Explain is a fresh, readable, witty romp through her new life in New York that's full of surprises and never gets routine. Reading it was like catching up with an old friend or rediscovering your favorite comfort food from childhood. There are a lot of books set in Manhattan, but Clarrisa's special blend of Ohio innocence, lyrical cynicism and optimism, and spot-on observational humor was a joy to read and full of surprises.” —Caren Lissner, author of CARRIE PILBY on THINGS I CAN'T EXPLAIN

“Best of all, Kriegman's women...feel real and full of unexpected dimensions.” —Santa Barbara Independent on Being Audrey Hepburn

“A fun, girly read [with] depth and intensity...Highly recommend.” —I'd So Rather Be Reading.com on Being Audrey Hepburn

“First-time novelist Kriegman (creator of Clarissa Explains It All) hits all the right notes for breezy escapist fiction.” —Publishers Weekly on Being Audrey Hepburn

“This is a fun romp: witty writing, passion and fashion, and oodles of Audrey. A perfect cure for the mean reds.” —Booklist on Being Audrey Hepburn

“For anyone who believes in the magical powers of the perfect dress, this is the book for you! Kriegman has created a delightful, mystical escape where readers can easily slip into the dress (and matching shoes!) of Manhattan's most elite. With a narrative voice fit for lovers of young adult and new adult fiction, and a fresh fun take on the beloved mistaken identity trope, Being Audrey Hepburn is sure to please a wide range of readers.” —Julie Cross, international bestselling author of Tempest on Being Audrey Hepburn

“Time to break out your loudest clothing, because Clarissa Darling is back. In a book, not a TV show. But still. Way cool.” —The Mary Sue

“Being a twenty something aspiring journalist with boy problems, roommate problems, money problems and parent problems sure is hard. But thankfully for all the Hannah Horvaths of the world, Clarissa Darling is coming back.” —New York Observer

“We're freaking out about the Clarissa Explains It All sequel.” —Hello Giggles

“Clarissa made me feel like my goals were possible despite the many naysayers I'd encounter in my life. Realistic and engaging, she was the first contemporary character that truly engaged me...Judging by fans' reactions to the news about Clarissa creator Mitchell Kriegman's upcoming Things I Can't Explain.... many others feel the same way.” —Geek Initiative

“Add in her talented computer game-creating skillz, a GUY best friend (practically unheard-of back then) who climbed in through her bedroom window via a ladder, and a pet alligator named Elvis, and [Clarissa] was everything I wanted to be.” —Glamour

MITCHELL KRIEGMAN has been published in The New Yorker, The National Lampoon, New York Press, Glamour, and Harper’s Bazaar. A winner of four Emmy Awards and a Directors Guild Award, he was also a writer for Saturday Night Live. Kriegman was the creator of the classic groundbreaking television series Clarissa Explains It All, as well as the executive head writer on Ren and Stimpy, Rugrats, and Doug. He is currently teaching writing and filmmaking at Stonybrook Southampton.
Loading...
or
Not Currently Available for Direct Purchase