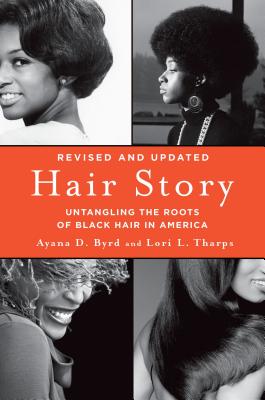 Untangling the Roots of Black Hair in America

Two world wars, the Civil Rights movement, and a Jheri curl later, Blacks in America continue to have a complex and convoluted relationship with their hair. From the antebellum practice of shaving the head in an attempt to pass as a "free" person to the 1998 uproar over a White third-grade teacher's reading of the book Nappy Hair, the issues surrounding African American hair continue to linger as we enter the twenty-first century.

Hair Story is a historical and anecdotal exploration of Black Americans' tangled hair roots. A chronological look at the culture and politics behind the ever-changing state of Black hair from fifteenth-century Africa to the present-day United States, it ties the personal to the political and the popular.

* Why Black American slaves used items like axle grease and eel skin to straighten their hair.
* How a Mexican chemist straightened Black hair using his formula for turning sheep's wool into a minklike fur.
* How the Afro evolved from militant style to mainstream fashion trend.
* What prompted the creation of the Jheri curl and the popular style's fall from grace.
* The story behind Bo Derek's controversial cornrows and the range of reactions they garnered.

Major figures in the history of Black hair are presented, from early hair-care entrepreneurs Annie Turnbo Malone and Madam C. J. Walker to unintended hair heroes like Angela Davis and Bob Marley. Celebrities, stylists, and cultural critics weigh in on the burgeoning sociopolitical issues surrounding Black hair, from the historically loaded terms "good" and "bad" hair, to Black hair in the workplace, to mainstream society's misrepresentation and misunderstanding of kinky locks.

Hair Story is the book that Black Americans can use as a benchmark for tracing a unique aspect of their history, and it's a book that people of all races will celebrate as the reference guide for understanding Black hair.


Praise For Hair Story: Untangling the Roots of Black Hair in America…

“Taps into the art and history of how Black hair is perceived in America in a way that will no doubt be relevant for generations to come.” —The Source

“Hair Story presents an absorbing rendition of American history told through Black hair. In prose that is both humorous and haunting, the authors manage to bring vividly to life a subject most would consider inconsequential. After reading this comprehensive tale, people will walk away with a whole new appreciation for Black hair and all of its wonder and power.” —Lloyd Boston, author of Men of Color: Fashion, History, Fundamentals

“From antiquity to the present day, Black hair has been both ornamentation and a medium of artistic expression. At the same time, its changing political and cultural values have often mirrored the current social climate. Hair Story, in documenting our natural hair's beauty and capacity for communication, brings to life and infuses with historical relevance this unique slice of Americana.” —Harriette Cole, author of Jumping the Broom and How to Be

“A comprehensive and colorful look at a very touchy subject.” —Essence

Ayana Byrd is a freelance journalist and professor of media studies at City College of New York. She is the co-editor of the anthology Naked: Black Women Bare All About Their Skin, Hair, Hips, Lips and Other Parts. Her writing has appeared on The Daily Beast, in magazines such as Glamour, Marie Claire, Essence, and Rolling Stone and in the anthologies The Fire This Time: Young Activists and the New Feminism, 30 Things Every Woman Should Have and Should Know Before She Turns 30, and Split: Writings From a Generation Raised on Divorce. Byrd lives in Brooklyn, NY.

Lori L. Tharps is an assistant professor of journalism at Temple University. In addition to Hair Story, she is the author of two other books, Kinky Gazpacho: Life, Love & Spain and the novel, Substitute Me. Both the Washington Post and Salon.com declared Kinky Gazpacho one of the Best Books of 2008. Tharps continues to write about race, identity, parenting and hair for media outlets both online and in print. Tharps lives in Philadelphia with her husband and three children.
Loading...
or support indie stores by buying on