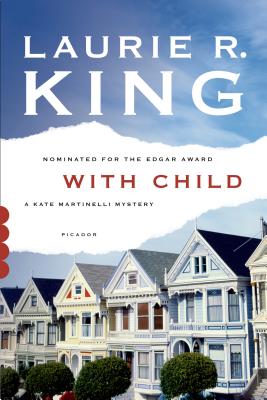 A Novel (A Kate Martinelli Mystery #3)

THE THIRD BOOK IN THE KATE MARTINELLI MYSTERY SERIES

In Laurie R. King's With Child, adrift in mist-shrouded San Francisco mornings and alcohol-fogged nights, homicide detective Kate Martinelli can't escape the void left by her departed lover, who has gone off to rethink their relationship. But when twelve-year-old Jules Cameron comes to Kate for a professional consultation, Kate's not sure she's that desperate for distraction.

Jules is worried about her friend Dio, a homeless boy she met in a park. Dio has disappeared without a word of farewell, and Jules wants Kate to find him. Reluctant as she is, Kate can't say no—and soon she finds herself forming a friendship with the bright, quirky girl. But the search for Dio will prove to be much more than both bargained for—and it's only the beginning.

When Jules disappears while taking a trip with Kate, a desperate search begins—and Kate knows all too well the odds of finding the child alive.


Praise For With Child: A Novel (A Kate Martinelli Mystery #3)…

“Smart, thoughtful...Warm characterizations...searching insights...this detective has a mind that is always on the move.” —The New York Times Book Review

“Martinelli is the kind of person you'd like to know and talk with over many lunches, a smart and tough woman.” —Chicago Tribune