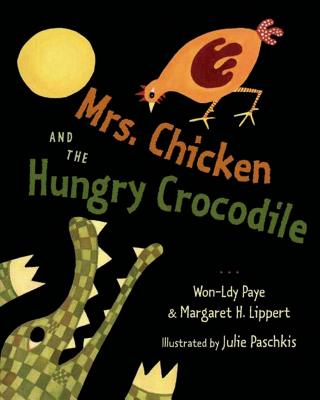 Mrs. Chicken has to think fast to outwit hungry Crocodile, who wants to eat her for dinner.

One morning Mrs. Chicken took her bath in a puddle.
"Cluck, cluck," she said proudly. "What a pretty chicken I am!"

Mrs. Chicken can't see her wings in the puddle, so she walks down to the river where she can admire all of herself. She doesn't know that Crocodile is there, waiting for dinner—and a tasty chicken would do nicely! To save herself, Mrs. Chicken tells Crocodile that they are sisters.
But how can a speckled chicken and a green-skinned crocodile be related? Mrs. Chicken had better prove that they are, and fast, because Crocodile is getting hungrier . . .

The authors and illustrator of Head, Body, Legs join together to create another lively retelling of a popular African folktale.

Mrs. Chicken and the Hungry Crocodile is a 2004 Bank Street Best Children's Book of the Year.

Won-Ldy Paye was trained as a storyteller by his grandmother. He is from the Dan people of northeastern Liberia, and now lives in Seattle, Washington. With Margaret H. Lipper he is author of books including Head, Body, Legs and The Talking Vegetables.

Margaret H. Lippert has taught in the United States, as well as in Guatemala and Tanzania, where she learned many stories. She lives on Mercer Island, Washington.

JULIE PASCHKIS won a Boston Globe-Horn Book Honor for Yellow Elephant. She is also the illustrator for the Worldwide Stories for children and lives in Seattle.

Praise For Mrs. Chicken and the Hungry Crocodile…

“* This delectable offering will be a hit at storytime.” —School Library Journal, starred review