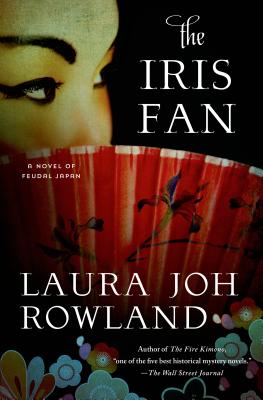 Japan, 1709. The shogun is old and ailing. Amid the ever-treacherous intrigue in the court, Sano Ichiro has been demoted from chamberlain to a lowly patrol guard. His relationship with his wife Reiko is in tatters, and a bizarre new alliance between his two enemies Yanagisawa and Lord Ienobu has left him puzzled and wary. Sano's onetime friend Hirata is a reluctant conspirator in a plot against the ruling regime. Yet, Sano's dedication to the Way of the Warrior—the samurai code of honor—is undiminished.

Then a harrowing, almost inconceivable crime takes place. In his own palace, the shogun is stabbed with a fan made of painted silk with sharp-pointed iron ribs. Sano is restored to the rank of chief investigator to find the culprit. This is the most significant, and most dangerous, investigation of his career. If the shogun's heir is displeased, he will have Sano and his family put to death without waiting for the shogun's permission, then worry about the consequences later. And Sano has enemies of his own, as well as unexpected allies. As the previously unimaginable death of the shogun seems ever more possible, Sano finds himself at the center of warring forces that threaten not only his own family but Japan itself.

Riveting and richly imagined, with a magnificent sense of time and place, The Iris Fan is the triumphant conclusion to Laura Joh Rowland's brilliant series of thrillers set in feudal Japan.


Praise For The Iris Fan: A Novel of Feudal Japan (Sano Ichiro Novels #18)…

“Rowland offers the usual high-stakes suspense, convincing period detail, and nuanced characters you care about. Readers will be sorry to see the last of Sano.” —Publishers Weekly on The Iris Fan

“A rousing, fitting conclusion to this long-running series.” —Booklist on The Iris Fan

“In addition to intricate plotting, Rowland's consistent strength throughout her series has been the authority she brings to her portraits of her idiosyncratic characters and their world. Her descriptions of the rituals, fixtures and worldview of feudal Japan never seem like mere wallpaper, but rather are elements crucial to the crimes that bedevil her characters.” —Maureen Corrigan, The Washington Post

“Fascinating . . . there are few things as delicious as a good old-fashioned power struggle--especially the costume-drama variety, involving sword battles and perfectly timed barbs exchanged by witty women pretending that they're just drinking tea.” —Oprah.com on The Incense Game

“Stellar . . . Once again, Rowland sets the bar high for her hero, who must navigate treacherous political shoals as well as deduce the killer's identity.” —Publishers Weekly (starred) on The Incense Game

“Excellent. . . . With mystery, excitement and a bang-up ending, this is one you won't be able to put down!” —RT Book Reviews (Top Pick) on The Incense Game

LAURA JOH ROWLAND is the author of the Sano Ichiro mysteries (Shinju, Bundori, and The Way of the Traitor), which have twice been named Best Mysteries of the Year by Publishers Weekly. She lived through a natural disaster when Hurricane Katrina nearly destroyed her house in New Orleans, and now lives in New York City.
Loading...
or
Not Currently Available for Direct Purchase