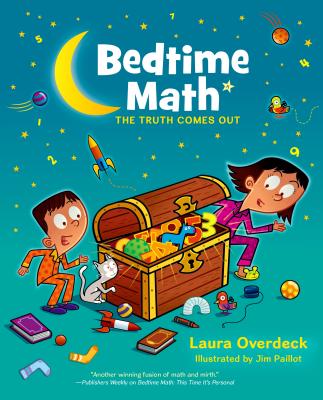 "We want kids to feel about math the way they feel about dessert after dinner." —Laura Overdeck, Time magazine

Our mission: to make math a fun part of kids' everyday lives. When is the last time you gave your child a math problem just for fun? Yesterday? Last year? Maybe never? We all know it's wonderful to read bedtime stories to kids, but the question remains—what about doing math? Math has a negative association in our culture and many Americans are uncomfortable and even fearful of math and numbers. But Bedtime Math is here to change all that.

In Bedtime Math 3, math and fun facts combine for one wacky and wild adventure! Now kids can discover the truth behind all their favorite things: marshmallows, Coca-Cola, astronaut ice cream, and more! These fun, mischief-making math problems aren't just kid-friendly, but actually, kid-appealing. With over 100 math problems on a variety of topics, kids will find math isn't just fun—it can be found everywhere! And with three different levels of challenge (Wee ones, Little kids, and Big kids), plus a Bonus question, there's something for everyone. We can make numbers fun—and change the world—one Bedtime Math problem at a time.

“Overdeck debuts with a just-irreverent-enough book . . . . She shows that she knows her audience and loves her subject. Paillot (the My Weird School series) is a great choice for collaborator . . . he does it all with a good-hearted, goofy energy that should propel readers through the pages.” —Publishers Weekly, starred review

“[This program] may have the potential to make bedtime math problems as loved as the bedtime story. . . . Hats off to Laura Overdeck. This project is a winner. A simple idea that may have as much of an impact on improving the science, technology, engineering and math interest in our children as many other well-funded programs.” —Wired/GeekDad

“We all know we should read to our kids. But even if bedtime stories are routine in your house, when's the last time you gave your kids a bedtime math problem? Probably never. And that's one reason American students might struggle in a future that requires mathematical literacy... Maybe if more children grew up doing bedtime math problems, those numbers would be different.” —USA Today

“Besides stopping the bad-mouthing of our own math skills and making sure that we're distributing our numbers-related conversations equally among our sons and daughters, what can a parent do to increase "math awareness" in our everyday lives? How about a bedtime math problem? . . . [in Bedtime Math]They're meant to be solved in their heads, and to promote both giggles and mathematical thought.” —New York Times Motherlode Blog

“The U.S. ranks 25th out of 34 countries when it comes to kids' math proficiency. One New Jersey parent wants to change that by overhauling the culture of math. An astrophysics graduate and mother of three kids, she started a ritual when each child was 2 years old: a little bedtime mathematical problem-solving that soon became a beloved routine. Parent friends began to bug her to send them kid-friendly math problems, too. Now Bedtime Math is gaining fans among children and math-shy parents around the country.” —NPR

Laura Overdeck has a BA in astrophysics from Princeton University and knows numbers. Since she enjoys them so much, she (along with her husband John) decided to give their three children math problems instead of bedtime stories, and BEDTIME MATH was born.

Jim Paillot has contributed illustrations to many children's books, including the Bedtime Math series.
Loading...
or support indie stores by buying on