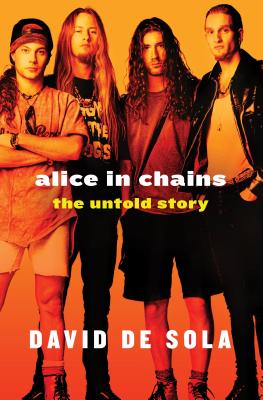 Alice in Chains were among the loudest voices out of Seattle. They were iconic pioneers who mixed grunge and metal in ways that continue to influence today's artists, and theirs is a story of hard work, self-destruction, rising from the ashes, and carrying on a lasting legacy.

Four years after their first meeting at a warehouse under Seattle's Ballard Bridge, Alice in Chains became the first of grunge's big four - ahead of Nirvana, Pearl Jam, and Soundgarden - to get a gold record and achieve national recognition. With the charismatic Layne Staley behind the microphone, they became one of the most influential and successful bands to come out of the Seattle music scene. But as the band got bigger, so did their problems.

Acclaimed journalist David de Sola delves beneath the secrecy, gossip, and rumor surrounding the band to tell their full story for the first time. Based on a wealth of interviews with people who have direct knowledge of the band, many speaking on the record for the very first time, de Sola explores how drugs nearly destroyed them and claimed the lives of Staley and founding bassist Mike Starr, follows Jerry Cantrell's solo career and Mike Starr's life after being fired from the band, and chronicles the band's resurrection with new lead singer William DuVall.

From their anonymous struggles to topping the charts with hits like "Would?," "Man in the Box," and "Rooster," Alice in Chains reveals the members of the band not as caricatures of rock stars but as brilliant, nuanced, and flawed human beings whose years of hard work led to the seemingly overnight success that changed the music scene forever.


Praise For Alice in Chains: The Untold Story…

“The early-'90s Seattle grunge band, long overshadowed by its hometown peers (Nirvana, Pearl Jam), gets its due in this debut book from a Georgetown graduate student. Taking center stage is original frontman Layne Staley who, like Kurt Cobain, found celebrity and success difficult and drugs an easy out. But there's also a deep dive into the band's musical influences and its impact on the broader rock scene, explaining both its roots and its reach” —Billboard, Summer Book Preview

“De Sola explains in riveting detail how AIC became one of the most important bands to emerge from the Seattle rock scene, and throws new light on the dark impulses that drove it to both greatness and tragedy. Compulsively readable.” —John Jobling, author of U2: The Definitive Biography

“A stellar grasp of document sources interwoven with an incredible depth of all-new interviews are the making of the first truly comprehensive biography of Alice in Chains. The story blends musical world, personal lives and the demands of the business Alice in Chains entered – whether the cut-price early days or the bombastic cash-overload of their peak success – to show how each element coexisted, impacted, clashed or simply destroyed the other.” —Nick Soulsby, author of I Found My Friends: The Oral History of Nirvana

“A well-reported history of one of the most important and influential bands to emerge from the Seattle scene. Alice in Chains will appeal to grunge fans and metal-heads alike.” —Mark Yarm, author of Everybody Loves Our Town: An Oral History of Grunge

David de Sola is a journalist with experience working at CNN, 60 Minutes, and Reuters. His work has also been published in The Atlantic, The Huffington Post and other print and online publications.

As a journalist, he has covered a range of stories including WikiLeaks, the War on Terrorism, the 2004 presidential elections, and the CIA leak investigation. He has filed stories from five foreign countries on two continents.

He has a B.A. in history from Tufts University, a M.A. in print journalism from the University of Southern California, and a M.A. in security studies from Georgetown University. He lives in Los Angeles, CA.

David is the author of Alice in Chains: The Untold Story.