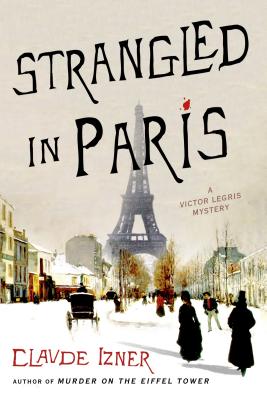 The coast of Normandy, France, 1894: A mysterious young woman is rescued by an anonymous man after a deadly shipwreck. Paris, a few months later: The body of a well-dressed woman in a velvet mask is found in the abattoir district of La Villette in Paris. Next to the brutally strangled corpse, the drunk watchman—who witnessed the crime but was too terrified to intervene—finds a pendant featuring a black unicorn. Newly married bookseller Victor Legris is asked by an acquaintance to solve the murder of Louise Fontane, but he is initially baffled by the case. Louise was poor, so where did her finery come from? And what is the significance of the black unicorn? Within days, two more murders startle Paris—both victims were well-respected and seemingly wealthy, both have been killed in a similar fashion, both men's apartments have been defaced and ransacked, and both were members of the Black Unicorn Society, an organization bent on finding the philosopher's stone. Victor and his assistant (and brother-in-law), Jojo, struggle to draw the connections between the murders. And they struggle to keep their sleuthing from their wives, who frown upon their interest in mysteries. As their secret investigation progresses, they discover that in belle époque Paris, young girls with no money or background are as ruthlessly preyed on as ever they were. . . . Strangled in Paris is the sixth installment in Claude Izner's mystery series starring Victor Legris.

CLAUDE IZNER is the pseudonym of two sisters, Liliane Korb and Laurence Lefevre. Both are second-hand booksellers on the banks of the Seine and experts on nineteenth-century Paris.

“...brooding and atmospheric, the sixth and best yet from Izner. Tense, dramatic, and clever, this puzzle should deservedly broaden the series' readership.” —Publishers Weekly (starred review)

“Izner again infuses a story with the knowledge of belle-epoque Paris, a cast of colorful and eccenctric characters and an intriguing plot. Readers will long for the next armchair excursion into Paris and its past.” —Richmond Times Dispatch

“Izner combines a sparkling puzzle (reminiscent of one of Agatha Christie's most famous novels) with complex characters and appealing descriptions of Paris, and Murder on the Eiffel Tower is a well-executed beginning to a series with great potential.” —Richmond Times-Dispatch

“An extremely satisfying traditional mystery with lots of suspects and panache. Izner writes in a witty, breezy style . . . The plot is terrific.” —Providence Journal-Bulletin

“The taut pacing and vivid period detail will have readers eagerly turning the pages.” —Publishers Weekly

“The energetic curiosity of the hero dovetails nicely with the readers' interest in a fascinating era. The colorful supporting cast lays a solid foundation for Victor's further exploits.” —Kirkus Reviews

“I read this charming, evocative, and suspenseful book with the mounting excitement I always get when I realize I've found a new series--I can't wait for the next Victor Legris book. What a pleasure it is to visit Paris with such an expert tour guide!” —Charles Finch, author of A Beautiful Blue Death

“Reading Izner is like taking a ride into the belle époque in a time machine. A wonderfully breathtaking ride.” —Boris Akunin, author of The Winter Queen