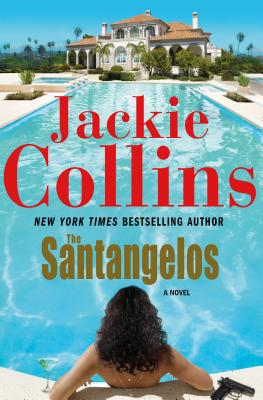 Legendary mega-seller Jackie Collins chronicles passion and power in one of America's most glamorous families in the New York Times bestseller, The Santangelos.

A vicious hit. A vengeful enemy. A drug addled Colombian club owner. A sex crazed Italian family. And the ever powerful Lucky Santangelo has to deal with them all, while Max-her teenage daughter is becoming The "It" girl in Europe's modeling world. And her Kennedyesque son, Bobby, is being set up for a murder he didn't commit. But Lucky can deal. Always strong and unpredictable with her husband, Lennie, by her side she lives up to the family motto-Never cross a Santangelo.

Lucky rules. The Santangelos always come out on top. An epic family saga filled with love, lust, revenge and passion.


Praise For The Santangelos: A Novel (Lucky Santangelo #10)…

"The Santangelo clan is in usual fine form with this fresh yet classically over-the-top page-turner, spearheaded by an indefatigable, libidinous heroine. Collins devotees will devour this flashy, racy indulgence."—Publishers Weekly
"The latest in the adventures of Collins' lady mobster with a heart of platinum, Lucky Santangelo...Collins' dim view of human nature never fails to entertain."—Kirkus Reviews

There have been many imitators, but only Jackie Collins (1937-2015) can tell you what really goes on in the fastest lane of all. From Beverly Hills bedrooms to a raunchy prowl along the streets of Hollywood; from glittering rock parties and concerts to stretch limos and the mansions of power brokers—Jackie Collins chronicles the real truth from the inside looking out. Jackie Collins has been called a “raunchy moralist” by the late director Louis Malle and “Hollywood’s own Marcel Proust” by Vanity Fair magazine. With over 400 million copies of her books sold in more than forty countries, and with some twenty-seven New York Times bestsellers to her credit, Jackie Collins is one of the world’s top-selling novelists. She is known for giving her readers an unrivalled insider’s knowledge of Hollywood and the glamorous lives and loves of the rich, famous, and infamous. “I write about real people in disguise,” she says. “If anything, my characters are toned down -- the truth is much more bizarre.” Ms. Collins books include Poor Little Bitch Girl, A Santangelo Story and Drop Dead Beautiful. Jackie Collins was awarded an OBE by Queen Elizabeth II in 2013. She lived in Los Angeles, CA.
Loading...
or
Not Currently Available for Direct Purchase