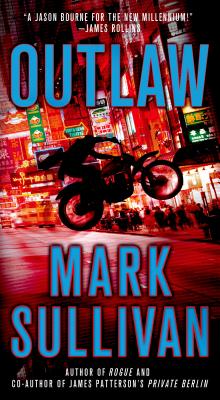 From the author of the bestselling Beneath a Scarlet Sky comes the latest adventure of Robin Monarch
"Action-packed...Comparisons to Robert Ludlum's Jason Bourne series are justified." -Associated Press

In Outlaw, the U.S. Secretary of State and the foreign ministers of China and India have been kidnapped. The "Sons of Prophecy" take responsibility and issue an ultimatum: If their demands are not met in seven days, the three will be beheaded live on the Internet. With the presidential election in only eight days, The President has few options-he can't meet their demands and he can't let them be executed. In desperation, he calls upon former CIA operative and master thief Robin Monarch.

"Sullivan has created a fine adventure-thriller hero in Monarch...The action and the surprises are nonstop."-Booklist

Monarch and his Chinese counterpart, a mysterious agent named Song Le, embark upon a dangerous journey into the underbelly of Southeast Asia, a world of corrupt Vietnamese Army officers, fanatical pirates, Hong Kong triad leaders, and volatile mercenaries living around the red light districts of Thailand. As they get closer and closer, with time quickly running out, Monarch learns that the diabolical kidnapping and ransom plot is only a front-one that reaches deep into the most sacred corridors of power...from which there is no escape...

"Thriller fans fond of high-stakes rescue scenarios will be more than satisfied."-Publishers Weekly

“A compelling, page-turning blend of spy and caper fiction. It's Robin Hood for the twenty- first century.” —Jeff Abbott, author of Downfall on OUTLAW

“Sullivan has created a fine adventure-thriller hero in Monarch, who fits perfectly into the Ludlum or Vince Flynn mode. The action and the surprises are nonstop. Readers will demand the next one in the series, pronto.” —Booklist on OUTLAW

“Thriller fans fond of high-stakes rescue scenarios will be more than satisfied.” —Publishers Weekly on OUTLAW

“A true juggernaut of a thriller, pure adrenaline in print. With the creation of Robin Monarch, Sullivan has crafted a Jason Bourne for the new millennium.” —James Rollins, New York Times bestselling author of The Devil Colony on ROGUE

“This lightning-fast read brings to mind Robert Ludlum and Mission Impossible--and will definitely appeal to adrenaline junkies.” —Booklist on ROGUE

“Fast moving and well-written! Rogue reminded me of the Bourne books and movies, only it's much, much better.” —James Patterson on ROGUE

“A loud, brawny festival of action.” —Publishers Weekly on ROGUE

“Diabolical! Filled with twists, turns, crosses, and double-crosses, Sullivan delivers a harrowing international thriller, while introducing one of the most compelling heroes since Jason Bourne.” —Lisa Gardner, New York Times bestselling author of Catch Me on ROGUE

“A compelling, page-turning blend of spy and caper fiction: it's Robin Hood for the twenty-first century. Loaded with intrigue, laced with detail, and full of bone-shaking action, Rogue is the fantastic start to an exciting new series.” —Jeff Abbott, internationally bestselling author of Adrenaline on ROGUE

“Robin Monarch is a great character that readers will embrace. His attitude and gruffness make him neither all good nor all evil, just human.” —Associated Press on ROGUE