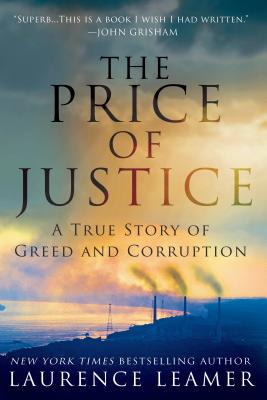 The Price of Justice

A True Story of Greed and Corruption

A nonfiction legal thriller that traces the fourteen-year struggle of two lawyers to bring the most powerful coal baron in American history, Don Blankenship, to justice

Don Blankenship, head of Massey Energy since the early 1990s, ran an industry that provides nearly half of America's electric power. But wealth and influence weren't enough for Blankenship and his company, as they set about destroying corporate and personal rivals, challenging the Constitution, purchasing the West Virginia judiciary, and willfully disregarding safety standards in the company's mines—in which scores died unnecessarily.
As Blankenship hobnobbed with a West Virginia Supreme Court justice in France, his company polluted the drinking water of hundreds of citizens while he himself fostered baroque vendettas against anyone who dared challenge his sovereignty over coal mining country. Just about the only thing that stood in the way of Blankenship's tyranny over a state and an industry was a pair of odd-couple attorneys, Dave Fawcett and Bruce Stanley, who undertook a legal quest to bring justice to this corner of America. From the backwoods courtrooms of West Virginia they pursued their case all the way to the U.S. Supreme Court, and to a dramatic decision declaring that the wealthy and powerful are not entitled to purchase their own brand of law.
The Price of Justice is a story of corporate corruption so far-reaching and devastating it could have been written a hundred years ago by Ida Tarbell or Lincoln Steffens. And as Laurence Leamer demonstrates in this captivating tale, because it's true, it's scarier than fiction.

Laurence Leamer is the bestselling author of more than a dozen books, including The Kennedy Women and Madness Under the Royal Palms. Leamer is an award winning journalist whose work has appeared in the New York Times Magazine, Harper's, and Playboy, and Newsweek. He lives in Washington, DC, and Palm Beach, Florida.
Loading...
or support indie stores by buying on