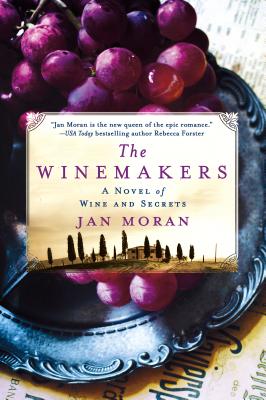 A Novel of Wine and Secrets

Many years ago, the Rosetta family’s hard-won dreams of staking their claim in the vineyards of California came to fruition. Now high-spirited, passionate Caterina Rosetta, who has inherited both her mother’s talent for crafting the finest wines and also her indomitable will, wants nothing more than to win her mother’s approval and work at her side. But that can never happen, because Caterina is keeping a secret that could ruin her: a daughter of her own, fathered by the love of her life, who left her without explanation. Just as she feels she has nowhere to turn, Caterina discovers that she has inherited a vineyard in the Tuscan countryside in Italy, from a grandmother she’s never heard of, and she seizes the chance to start a new life for herself and her child.

But the past is not so easily outrun. In the country of her ancestors, Caterina meets the family of the father she never knew, and discovers that her mother is also hiding her own secret—a secret so devastating it threatens the future of everything her family has worked for. As an old murder comes to light, and Caterina uncovers a tragedy that may destroy the man she loves, she realizes her happiness will depend on revealing the truth of her mother’s buried past—if she has the strength to face it.

From author Jan Moran comes The Winemakers, a sweeping, romantic novel that will hold you in its grasp until the last delicious sip.


Praise For The Winemakers: A Novel of Wine and Secrets…

"Readers will devour this page-turner as the mystery and passions spin out. VERDICT: A solid pick for fans of historical romances combined with a heartbreaking mystery." - Library Journal

“As she did with fragrance and scent-making in Scent of Triumph, Moran weaves knowledge of wine and winemaking into this intense family drama.” - Booklist

JAN MORAN is the author of several books, including Scent of Triumph, and Fabulous Fragrances I and II, which earned spots on the Rizzoli Bookstore bestseller list. As a fragrance and beauty expert, she has been featured in numerous publication and on television and radio, including CNN and Extra, Instyle, Allure, Women's Wear Daily, and O Magazine. She earned her MBA from Harvard Business school, her BBA from the University of Texas, and created Scentsa, a touch-screen program for fragrance and skincare, for Sephora stores in the US, Canada, France, Mexico, Brazil, and Denmark. She has spoken before Fashion Group International, the Fragrance Foundation, and The American Society of Perfumers. She has also attended the University of California at Los Angeles Extension Writers' Program, studying fiction, nonfiction, and screenwriting.
Loading...
or
Not Currently Available for Direct Purchase