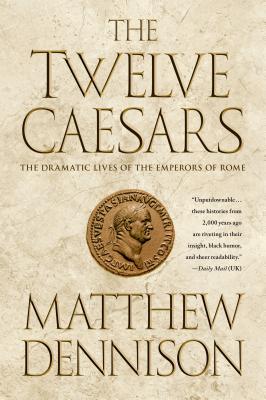 The Dramatic Lives of the Emperors of Rome

An unforgettable depiction of the Roman empire at the height of its power and reach, and an elegantly sensational retelling of the lives and times of the twelve Caesars

One of the them was a military genius, one murdered his mother and fiddled while Rome burned, another earned the nickname "sphincter artist". Six of their number were assassinated, two committed suicide—and five of them were elevated to the status of gods. They have come down to posterity as the "twelve Caesars"—Julius Caesar, Augustus, Tiberius, Caligula, Claudius, Nero, Galba, Otho, Vitellius, Vespasian, Titus, and Domitian. Under their rule, from 49 BC to AD 96, Rome was transformed from a republic to an empire, whose model of regal autocracy would survive in the West for more than a thousand years.

Matthew Dennison offers a beautifully crafted sequence of colorful biographies of each emperor, triumphantly evoking the luxury, license, brutality, and sophistication of imperial Rome at its zenith. But as well as vividly recreating the lives, loves, and vices of this motley group of despots, psychopaths and perverts, he paints a portrait of an era of political and social revolution, of the bloody overthrow of a proud, five-hundred-year-old political system and its replacement by a dictatorship which, against all the odds, succeeded more convincingly than oligarchic democracy in governing a vast international landmass.


Praise For The Twelve Caesars: The Dramatic Lives of the Emperors of Rome…

“Dennison offers his own idiosyncratic take on these twelve caesars . . . [his] approach combines thoughtful reflection and analysis with gossipy irreverence in a bewitching cocktail.” —Daily Express on The Twelve Caesars

“Unputdownable . . . these histories from 2,000 years ago are riveting in their insight, black humor, and sheer readability.” —Daily Mail on The Twelve Caesars

“An erudite, nuanced, and engrossing portrait of a turbulent era and of an empress demonized for refusing to be invisible.” —Publishers Weekly on Livia, Empress of Rome

“Fascinating.” —Vogue on The Last Princess

Matthew Dennison is the author of The Last Princess: The Devoted Life of Queen Victoria's Youngest Daughter and Livia, Empress of Rome. A journalist, he contributes to The Times, The Daily Telegraph, Country Life, and The Spectator. He is married and lives in London and North Wales.
Loading...
or
Not Currently Available for Direct Purchase