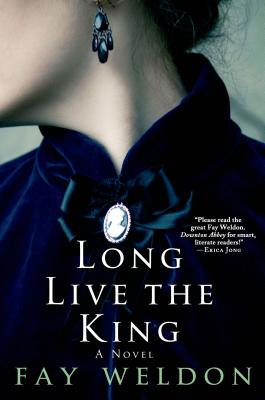 From the award-winning writer of the original Upstairs Downstairs—the second novel in an irresistible trilogy about an Earl's family and his servants at the turn of the twentieth century.

As 1901 comes to an end, there is much to be grateful for: The Dilberne fortune has been restored, and the grand Dilberne Court, with its one hundred rooms, has been saved. Lord Robert's son, Arthur, is happily married to Chicago heiress, Minnie, who is pregnant and trying to come to terms with her new role as lady of the manor, and her charming but controlling mother-in-law, Lady Isobel. As Lord Robert and Lady Isobel get caught up in the preparations of the coronation of Edward VII, they debate the future of their recently orphaned niece, Adela. Isobel and Minnie want to take her in; Robert and Arthur do not. While they argue, Adela runs away and joins a travelling group of spiritualists and has a life-saving run-in with the king.
With Long Live the King, Fay Weldon continues the magnificent trilogy that began with Habits of the House. As the award-winning writer for the pilot episode of the original Upstairs Downstairs, Weldon brings her deservedly famous wit and insight to this novel of love and desire, morals and manners.


Praise For Long Live the King: A Novel (Habits of the House #2)…

“Weldon remains at the top of her game with [Long Live the King]....Fans of Downton Abbey will relish this rich and witty comedy of manners.” —Star Tribune

“Teeming with tasty tidbits about royals great and small, Weldon's second installment in her Dilberne Court trilogy gives devoted Anglophiles a whirlwind tour upstairs, downstairs, and all around the castle.” —Booklist on Long Live the King

“Before there was DOWNTON ABBEY, there was UPSTAIRS, DOWNSTAIRS and, having written the first episode of that iconic television series, it is only fitting that Weldon now returns to the scene of the crime to further explore the disparate worlds of "them that has and those what serve 'em."... Always a ripe target for mockery and disdain, the British aristocracy comes in for a thorough drubbing in Weldon's snarky send-up.” —Booklist

“My favorite part of the original series is the first episode because it was written by a great English novelist, Fay Weldon. Everybody was introduced so cleverly . . . so beautifully established.” —Jean Marsh, co-creator of Upstairs, Downstairs

“There is simply no touching Weldon as a writer.” —The Observer (UK)

“Fay Weldon has always examined the scary parts of what lies beneath the silk cushions and behind the closed gates.” —The Chronicle of Higher Education

“I was a girl from Downstairs. When I was 16, my bedroom was in the basement of a posh house in London, where my mother was the housekeeper. . . . Odd, this class business. Here's Upstairs Downstairs back again, Downton Abbey so popular.” —Fay Weldon