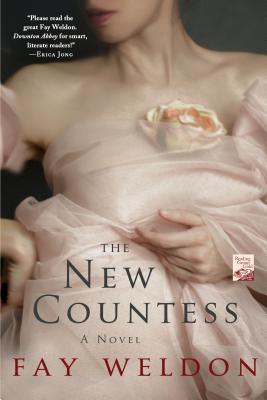 England, 1905. Lord Robert and Lady Isobel Dilberne, as well as their entire regal estate, with its hundred rooms, are busy planning for a lavish visit from King Edward VII and his mistress just a few months away. Preparations are elaborate and exhaustive: the menus and fashions must be just so. But even amidst the excitement, not everyone is happy.

Lady Rosina—now widowed and wealthy— insists on publishing a scandalous book despite her mother's objections. Arthur Dilberne and Chicago Heiress Minnie O'Brien's two young sons—the eldest of whom is heir to the estate—are being reared to Lady Isobel's tastes, not Minnie's. After making a shocking discovery, Minnie will take drastic measures for the sake of her children. And when fate deals a hand in the middle of the royal shooting party, the entire Dilberne estate will face upheaval once again.

The New Countess is the final novel in Fay Weldon's outstanding trilogy that began with Habits of the House and Long Live the King. As the bestselling novelist and award-winning writer for the pilot episode of the original Upstairs Downstairs, Weldon magnificently lifts the curtain on early twentieth-century British society, upstairs and downstairs, under one stately roof.


Praise For The New Countess: A Novel (Habits of the House #3)…

“Readers will be eager to plunge in…Weldon has deftly capitalized on the Downton Abbey momentum.” —Booklist

“Funnier and nastier than the two earlier volumes.” —Kirkus Reviews

“The novel's conclusion is surprising. With remarkable skill, Weldon reverses the reader's expectations in such a way that the astonishment is followed by an immediate recognition of inevitability.” —The Star Tribune

“Weldon knows her subject and era well, and the last book [The New Countess] in her trilogy is perhaps her best.” —RT Book Reviews

“Weldon amuses with her usual mix of courtly language undercut by snark.” —The Boston Globe

“Teeming with tasty tidbits about royals great and small, Weldon's second installment in her Dilberne Court trilogy gives devoted Anglophiles a whirlwind tour upstairs, downstairs, and all around the castle.” —Booklist on Long Live the King

“House (2013), gives devoted Anglophiles a whirlwind tour upstairs, downstairs, and all around the castle.” —Booklist on Long Live the King

“Weldon's flair for capturing the grudging envy shared by the British and their colonial counterparts is worth more than its market value in fool's gold.” —The New York Times on Habits of the House

“Before there was Downton Abbey, there was Upstairs, Downstairs, and, having written the first episode of that iconic television series, it is only fitting that Weldon now returns to the scene of the crime to further explore the disparate worlds of 'them that has and those what serve 'em.'...Always a ripe target for mockery and disdain, the British aristocracy comes in for a thorough drubbing in Weldon's snarky send-up.” —Booklist on Habits of the House

“There is simply no touching Weldon as a writer.” —The Observer (UK) on Habits of the House

“Fay Weldon has always examined the scary parts of what lies beneath the silk cushions and behind the closed gates.” —The Chronicle of Higher Education on Habits of the House