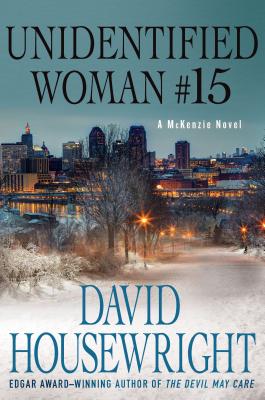 During one of the first heavy snows of the winter, on the Interstate outside the Twin Cities, Rushmore McKenzie is behind a truck behaving erratically when the man in the truck bed dumps a body out onto the road, right in front of McKenzie's car. McKenzie avoids hitting the body, a bound woman who is just barely alive, but his stopped car in the middle of the road starts a chain of accidents, resulting in a thirty-seven car pile-up. By the time the time the police arrive, and the EMTs and ambulances have taken care of the immediate injuries, the truck is long gone.

The injured woman awakens with no memories—not of the accident, not of anything—and is labeled by the police as Unidentified Woman #15. With few leads, the detective in charge, McKenzie's former partner and old friend Bobby Dunston, turns to McKenzie for a favor. Now McKenzie has to try to identify the grievously injured woman, find out who tied her up and dumped on the freeway to die. And why.

“McKenzie has a voice that is very much like that of Boston private eye Spenser; readers will have a good time just listening to McKenzie sizing up people and situations.” —Booklist (starred review) on The Devil May Care

“Exceptional...McKenzie is a thoughtful, compassionate judge of the confused and wayward people in his path. Wry humor helps balance the tension in this tale of misguided love and obsession.” —Publishers Weekly (starred review) on The Devil May Care

“Housewright's... books may be lighter in tone than John Sandford's, but are just as suspenseful and satisfying.” —Star Tribune (Minneapolis) on Curse of the Jade Lily

“If you took a modern-day noir and mixed it with a light comedy, you'd get something very much like a McKenzie novel: a serious, occasionally dark story told by an entertaining, often bemused narrator… An excellent series.” —Booklist on The Last Kind Word

“If you haven't discovered Housewright, you're in for a real treat--this is a real gem from one of America's best crime novelists.” —Lansing State Journal on Jelly's Gold

“It's clear that Housewright is a Minnesotan in his bones, so his depiction of everything from beekeeping to the byways of Hilltop embeds us in a location where quiet indiscretions and desires highlight daily life.” —Washington Post on Tin City

DAVID HOUSEWRIGHT has won both the Edgar Award and the Minnesota Book Award (twice) for his crime fiction.  His recent books include The Devil May Care, The Last Kind Word, and Curse of the Jady Lily. He lives in St. Paul, Minnesota.
Loading...
or
Not Currently Available for Direct Purchase