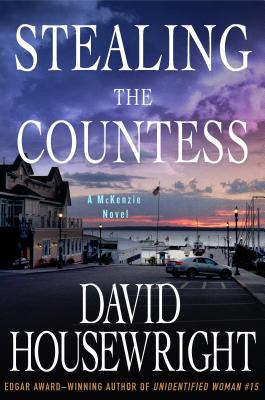 Since becoming an unlikely millionaire and quitting the St. Paul Police Department, Rushmore McKenzie has been working as an unlicensed private investigator, basically doing favors for friends and people in need. But even for him, this latest job is unusual. He's been asked to find a stolen Stradivarius, known as the Countess Borromeo, that only the violinist seems to want him to find.

Stolen from a locked room in a B&B in the violinist's former hometown of Bayfield, Wisconsin, the violin is valued at $4 million and is virtually irreplaceable. But the foundation that owns it and their insurance company refuses to think about buying it back from the thief (or thieves.) However, Paul Duclos, the violinist who has played it for the past twelve years, is desperate to get it back and will pay out of his own pocket to get it back.

Though it's not his usual sort of case, McKenzie is intrigued and decides to try and help, which means going against the local police, the insurance company, the FBI's Art Crime division, and his own lawyer's advice. And, as he quickly learns, there's a lot more going on than the mere theft of a priceless instrument.

"All hell breaks loose in the thirteenth entry in Edgar-winning Housewright’s very strong Mac McKenzie series... The series makes great use of the variegated landscapes - filled with opportunities for crime and escape - of Minnesota and Wisconsin... Greatly enhancing the story are the fascinating details Housewright provides on the history and design of these priceless instruments [Stradivarius violins]." - Booklist (starred review)

"The brazen theft of a Stradivarius violin ... provides Rushmore McKenzie with some ethical challenges in Housewright’s entertaining 13th mystery featuring the unlicensed St. Paul, Minn., PI... The charming lead enhances the crime puzzle, which is both complex and logical." - Publisher's Weekly

"Housewright has such a pleasing writing style that the who-done-it aspect of things can almost be looked upon as a literary bonus." - The Gazette

"A thoroughly satisfying jaunt with an ending that's tied up as pretty as a bow; in short, it's the perfect read for a summer weekend." - Criminal Element

DAVID HOUSEWRIGHT has won both the Edgar Award and the Minnesota Book Award (twice) for his crime fiction.  His recent books include The Devil May Care, The Last Kind Word, and Curse of the Jady Lily. He lives in St. Paul, Minnesota.
Loading...
or
Not Currently Available for Direct Purchase