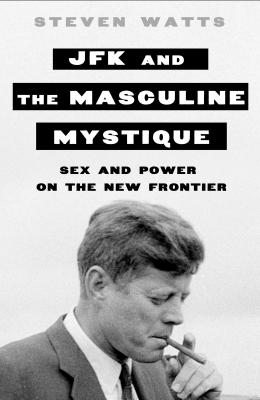 JFK and the Masculine Mystique

Sex and Power on the New Frontier

From very early on in his career, John F. Kennedy’s allure was more akin to a movie star than a presidential candidate. Why were Americans so attracted to Kennedy in the late 1950s and early 1960s—his glamorous image, good looks, cool style, tough-minded rhetoric, and sex appeal?

As Steve Watts argues, JFK was tailor made for the cultural atmosphere of his time. He benefited from a crisis of manhood that had welled up in postwar America when men had become ensnared by bureaucracy, softened by suburban comfort, and emasculated by a generation of newly-aggressive women. Kennedy appeared to revive the modern American man as youthful and vigorous, masculine and athletic, and a sexual conquistador. His cultural crusade involved other prominent figures, including Frank Sinatra, Norman Mailer, Ian Fleming, Hugh Hefner, Ben Bradlee, Kirk Douglas, and Tony Curtis, who collectively symbolized masculine regeneration.

JFK and the Masculine Mystique is not just another standard biography of the youthful president. By examining Kennedy in the context of certain books, movies, social critiques, music, and cultural discussions that framed his ascendancy, Watts shows us the excitement and sense of possibility, the optimism and aspirations, that accompanied the dawn of a new age in America.


Praise For JFK and the Masculine Mystique: Sex and Power on the New Frontier…

“A fantastic look at the famed masochism of the thirty-fifth president. While Watts is writing on astronaut Alan Shepard or author Norman Mailer, the Rat Pack led by Frank Sinatra or the sexy hubris of Hugh Hefner, his mastery of American culture and history is self-evident. This book sparkles with fresh insights and unforgettable anecdotes. Highly recommended!”- Douglas Brinkley, Professor of History at Rice University and author of Rightful Heritage: Franklin D. Roosevelt and the Land of America.

"Sometimes the most important historical insights are hiding in plain sight. One is the connection between John F. Kennedy's popularity and the obsessive masculinity of American popular culture during the early 1960s, a connection historians have overlooked for decades. Now--at last--Steven Watts has probed it with elegance, authority, and a wealth of fascinating detail. The result is a devastating takedown of the Kennedy cult. JFK and the Masculine Mystique reveals the cultural pathology that underlay Kennedy's reckless foreign policy and that paved the way for the invasion of Vietnam. Camelot will never look as shiny or as magical again." --Jackson Lears, author of Rebirth of a Nation

"In brilliantly dissecting the style of JFK, Steven Watts has elucidated the substance of Kennedy’s time—its politics; its culture; its social, gender, and domestic arrangements. No more discerning book has been written about Kennedy."--Benjamin Schwarz, National Editor, The American Conservative

STEVEN WATTS is an award-winning professor of history at the University of Missouri. He has been a consultant and on-screen expert for several documentaries appearing on PBS, the History Channel, NBC, CNBC, CBS, Bloomberg News, and Fox. He is the author of JFK and the Masculine Mystique.
Loading...
or
Not Currently Available for Direct Purchase