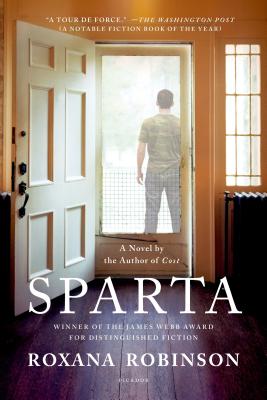 Conrad Farrell does not come from a military family, but as a classics major at Williams College, he has encountered the powerful appeal of the Marine Corps ethic: Semper Fidelis comes straight from Sparta, a society where every citizen doubled as a full-time soldier. When Conrad graduates, he joins the Marines to continue a long tradition of honor, courage, and commitment over the course of a four-year tour in Iraq. When we meet him, he has just come home to Katonah, New York. As Conrad attempts to find his footing in the civilian world, he learns how hard it is to return to the people and places he used to love. Gradually, he awakens to a growing rage and the realization that something has gone wrong.

Suspenseful, compassionate, and perceptive, Roxana Robinson's Sparta "is a beautifully written novel that illuminates what happens when we're estranged from the world as we know it" (Chicago Tribune).


Praise For Sparta: A Novel…

“A tour de force.” —The Washington Post (A Notable Fiction Book of the Year)

“[A] page-turner...Sparta is an exceptional account of life after war. Four out of four stars.” —People

“One of the many strengths of this engaging story is that Robinson doesn't treat post-traumatic stress disorder with that nifty abbreviation, PTSD, neatly buttoning it in place.” —The New York Times Book Review (Editors' Choice)

“Robinson brings the tolls of war up close....Her powerful novel demonstrates that fiction actually can function as a sort of explosive device.” —The Washington Post

“Sparta's force lies in its level of bared psychological detail...It sounds an alarm for an invisible American crisis.” —The Wall Street Journal

“Roxana Robinson's Sparta delicately explores the fissures between the military experience and civilian life with this portrait of a liberal northeastern family and what happens when their son, a young Marine lieutenant, returns home from Iraq irrevocably changed. This book is not simply about war, but about the horror and enforced isolation of trauma, the inevitable merging of the personal and the political, and the possibilities and trials found within the bonds of familial and romantic love.” —Phil Klay, author of Redeployment

“Roxana Robinson's Sparta is a feat of the imagination. Vividly and with unflinching wisdom, Robinson has given voice, substance, and profound reality to her protagonist, Conrad Farrell of the Marine Corps--and in so doing, to thousands of veterans like him.” —Claire Messud, author of The Woman Upstairs and The Emperor's Children

“Sparta gives us an unflinching portrayal of the costs of war, costs that go far beyond what the tallies of killed and wounded can tell us. There are plenty of losses that can be measured only in the language of the spirit, and it's books such as this one, necessary books, that guide us to a fuller appreciation of war's costs.” —Ben Fountain, author of Billy Lynn's Long Halftime Walk

“Both lyrical and unsentimental, richly honest and humane.” —The Wall Street Journal

Roxana Robinson is the author of more than ten books, including the novels Sparta and Cost; short story collections; and the biography Georgia O'Keeffe: A Life. Her work has appeared in The Atlantic, The New Yorker, Harper's Magazine, The Washington Post, The Wall Street Journal, and Vogue, among other publications. She has received fellowships from the National Endowment for the Arts and the Guggenheim Foundation, and she was president of the Authors Guild from 2014 to 2017. She teaches in the Hunter College MFA program and divides her time among New York, Connecticut, and Maine.
Loading...
or support indie stores by buying on