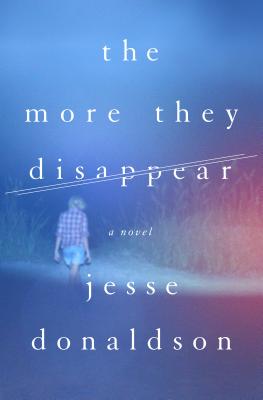 The More They Disappear

"The More They Disappear delivers everything a reader could want. On one hand a compelling literary thriller, on the other a deep and generous meditation on life in a small town torn by addiction, poverty, and corruption." --Philipp Meyer, author of The Son

The investigation throws Harlan headlong into the burgeoning OxyContin trade, from the slanted steps of trailer parks to the manicured porches of prominent citizens, from ATV trails and tobacco farms to riverboat casinos and country clubs.

As the evidence draws him closer to an unlikely suspect, Harlan comes to question whether the law can even right a wrong during the corrupt and violent years that followed the release of OxyContin.

The More They Disappear takes us to the front lines of the battle against small-town drug abuse in an unnerving tale of addiction, loss, and the battle to overcome the darkest parts of ourselves.


Praise For The More They Disappear: A Novel…

“A fine first novel … Donaldson is a soulful writer, especially sensitive to imagery that reflects [his] young sheriff’s sense of desolation.” –The New York Times

"[T]he puzzles behind every plot twist never stop coming in this brilliant and perverse first novel." -The Toronto Star

"Donaldson relentlessly tracks the devastating fallout from [a sheriff’s] death as it sweeps through Marathon, Ky." –Publishers Weekly

"The More They Disappear delivers everything a reader could want. On one hand a compelling literary thriller, on the other a deep and generous meditation on life in a small town torn by addiction, poverty, and corruption." -Philipp Meyer, author of The Son

"Smart and fast-paced but also deeply humane, The More They Disappear is everything I look for in a novel." -Holly Goddard Jones, author of The Next Time You See Me

“This feels like what Denis Johnson, Richard Price, or even Graham Greene might have written if they had the precise feel for the region that gave us bluegrass and bourbon.” -Daniel Torday, author of The Last Flight of Poxl West

"A heartbreaking whydunit set in the ferocious Kentucky hills, The More They Disappear is relentless but masterful in its portrayal of love, addiction, and lonesomeness." —Smith Henderson, author of Fourth of July Creek

“People die, drug deals go wrong, things get real ugly, but the heart of this novel is its attentiveness to all the ways we fail to love and be loved.” —Michael Parker, author of The Watery Part of the World

"Donaldson's debut goes beyond the genres of crime and mystery into something much deeper and more profound. Read this book." —James Scott, author of The Kept

"If there’s anyone out there still lamenting the absence of Elmore Leonard’s “Justified” on TV, you can get your fix of small-town Kentucky criminals in Jesse Donaldson’s debut thriller, The More They Disappear.... The novel works on a number of levels and should appeal to a broad swath of readers, whether you’re looking for an action-filled genre story or an introspective study of how addiction and poverty can lead to absolute corruption, lies, and shattered dreams." -BookPage

"The More They Disappear makes great use of a number of diverse characters, perspectives, and parts of a town to tell a gripping and powerful tale. It's the best kind of crime fiction, in that it tells a story with some fun twists and turns and also illustrates some powerful and painful truths about the human condition." -Criminal Element

Jesse Donaldson was born and raised in Kentucky, attended Kenyon College and Oregon State University, and was a fellow at The Michener Center for Writers in Austin, Texas. His writing has appeared in The Oxford American, The Greensboro Review, and Crazyhorse. Among other things, he’s worked as a gardener, copywriter, teacher, and maintenance man. He currently lives in Oregon with his wife and daughter and a dog named Max. The More They Disappear is his first novel.
or
Not Currently Available for Direct Purchase