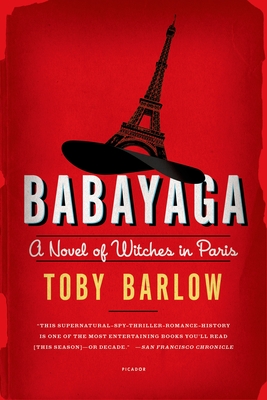 A Novel of Witches in Paris

The year is 1959, and strange events are brewing in Paris, a city where nothing (and no one) is as it seems.

We meet Will, who hails from Detroit and works at an international advertising agency, which is also a front for the CIA. Then there's the enchanting Zoya, who could cast a spell with her looks—and, as a witch, she often does (she also recently impaled her ex on a spike).

Inspector Vidot, on the other hand, is a hardworking police detective who cherishes a quiet evening at home. Until he follows a lead on a particularly gruesome murder—and finds himself turned into a flea. And the adventure wouldn't be complete without Oliver, a fun-loving American patrician who has come to Paris to launch a literary journal with the support of certain secretive friends.

Add a few chance encounters, a chorus of angry witches, and a weaponized LSD program, and you have Toby Barlow's Babayaga: a wickedly sharp tale of the City of Light that's part love story, part thriller, and pure brilliance.


Praise For Babayaga: A Novel of Witches in Paris…

“This supernatural-spy-thriller-romance-history is one of the most entertaining books you'll read [this season]--or decade.” —San Francisco Chronicle

“Barlow is adept at combining unexpected genres....When Barlow began writing fiction, he has said, he was ‘blessed by Plimpton's spirit of making the impossible possible.' This book continues in that tradition: It's an absurd hybrid that winds up as a bewitching caper novel.” —Los Angeles Times

Toby Barlow is the author of Sharp Teeth. He lives in Detroit.
Loading...
or
Not Currently Available for Direct Purchase