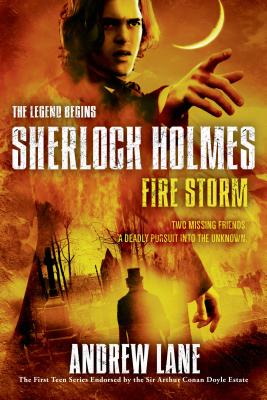 In Fire Storm by Andrew Lane, young Sherlock's friend and her father have vanished. Their house looks as if nobody has ever lived in it; the neighbors claim never to have heard of them. Sherlock begins to doubt his sanity, until a clever clue points him to Scotland. Following that clue leads him into a mystery that involves kidnapping, bodysnatchers, and a man who claims he can raise the dead. Only the budding detective Sherlock can untangle the mind-bending—and dangerous—puzzles that ensnare his friends. Think you know Sherlock Holmes? Think again!

“Fans of the previous books will devour it; new readers to the series will have no problem diving in.” —Kirkus Reviews

“Purists will applaud.” —The Wall Street Journal on Death Cloud

“For a reader who has outgrown the Hardy Boys' adventures but still seeks mystery-solving plots.” —Chicago Tribune on Death Cloud

“Lane does a terrific job . . . A solid mix of adventure and character.” —Booklist on Death Cloud

Andrew Lane is the author of the Young Sherlock Holmes series of young adult novels, starting with Death Cloud. He has also written numerous spin-off novels based on the BBC sci-fi television series Doctor Who, as well as definitive guides to Babylon 5 and the Wallace and Gromit films, and is the author of The Bond Files: An Unofficial Guide to the World's Greatest Secret Agent. He lives in Dorset, England.
Loading...
or support indie stores by buying on