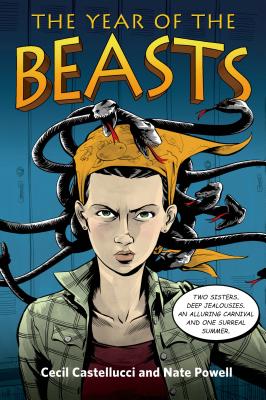 The Year of the Beasts

Alternating chapters of prose and comics (illustrated by Eisner Award-winning graphic novelist Nate Powell) are interwoven in Cecil Castelucci's extraordinary YA novel about jealousy and grief, and how they cut us off from the ones we love.

Every summer the trucks roll in, bringing the carnival and its infinite possibilities to town. This year Tessa and her younger sister Lulu are un-chaperoned and want to be first in line to experience the rides, the food . . . and the boys. Except this summer, jealousy will invade their relationship for the first time, setting in motion a course of events that can only end in tragedy, putting everyone's love and friendship to the test.

Castellucci's deft shifting between straight prose and graphic novel visualize how Tessa processes the events of the summer, seeing herself and her friends as freaks personified by characters from Greek mythology.


Praise For The Year of the Beasts…

“Sophisticated readers will eat this . . . right up.” —Kirkus Reviews

“This is a book teens will likely read and reread.” —Publishers Weekly

“A poignant and entertaining mixture of storytelling and nightmare.” —VOYA

Nate Powell is an Arkansas native and Eisner Award-winning cartoonist whose works include Swallow Me Whole (an Los Angeles Times Book Prize finalist), Any Empire, and (with co-authors Congressman John Lewis and Andrew Aydin) the March trilogy, the final volume of which won the National Book Award for Young People's Literature. Powell is the first cartoonist to receive this honor. He lives in Bloomington, Indiana.
Loading...
or support indie stores by buying on