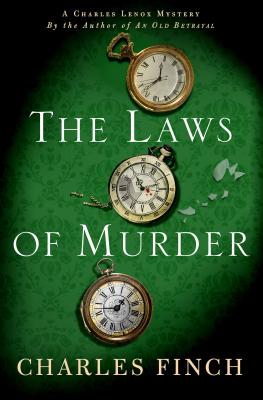 The Laws of Murder

It's 1876, and Charles Lenox, once London's leading private investigator, has just given up his seat in Parliament after six years, primed to return to his first love, detection. With high hopes he and three colleagues start a new detective agency, the first of its kind. But as the months pass, and he is the only detective who cannot find work, Lenox begins to question whether he can still play the game as he once did.

Then comes a chance to redeem himself, though at a terrible price: a friend, a member of Scotland Yard, is shot near Regent's Park. As Lenox begins to parse the peculiar details of the death – an unlaced boot, a days-old wound, an untraceable luggage ticket – he realizes that the incident may lead him into grave personal danger, beyond which lies a terrible truth.

With all the humanity, glamor, and mystery that readers have come to love, the latest Lenox novel is a shining new confirmation of the enduring popularity of Charles Finch's Victorian series.

“Finch is as skillful at evoking Victorian London as he is at spinning a crackerjack plot, this one with tentacles into the underworld of the upper class. Lenox's eighth outing, after An Old Betrayal (2013), is a solid addition to this much-lauded series.” —Booklist

“Superb . . . Boasting one of Finch's tightest and trickiest plots, this installment further establishes Lenox as a worthy heir to the aristocratic mantle of Lord Peter Wimsey.” —Publishers Weekly (starred) on A Death in the Small Hours

“The sixth in Finch's steadily improving series develops the congenial continuing characters further while providing quite a decent mystery.” —Kirkus Reviews on A Death in the Small Hours

Charles Finch is the USA Today bestselling author of the Charles Lenox mysteries, including the most recent, The Woman in the Water (February 2018). His first contemporary novel, The Last Enchantments, is also available from St. Martin's Press. Finch received the 2017 Nona Balakian Citation Award, for excellence in reviewing, from the National Book Critics Circle. His reviews and essays have appeared in the New York Times, Chicago Tribune, and elsewhere. He lives in Chicago with his family.
Loading...
or
Not Currently Available for Direct Purchase