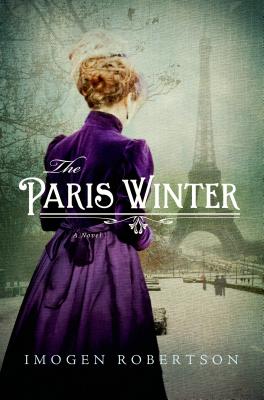 “In 1909 Paris, a Russian princess, a French model, and a young Englishwoman meet at Academie Lafond, a school for aspiring female artists. It was a time when it was a woman's duty to marry and support her husband in his career and become the work of art, not the artist. These fictional characters are inspired by real women such as Suzanne Valadon, a friend and muse to Toulouse Lautrec; Ada Leigh, who ran a house for penniless English and American women in Paris; and Gertrude Stein, whose salon paintings noted in The Paris Winter were Picasso's. The reader, drawn into the underbelly of Paris with its backdrop of opium addiction, murder, and revenge, will be haunted by this tale long after the last page is turned.”
— Karen Briggs, Great Northern Books and Hobbies, Oscoda, MI
View the List

There is but one Paris.
Vincent Van Gogh

Maud Heighton came to Lafond's famous Academie to paint, and to flee the constraints of her small English town. It took all her courage to escape, but Paris, she quickly realizes, is no place for a light purse. While her fellow students enjoy the dazzling decadence of the Belle Epoque, Maud slips into poverty. Quietly starving, and dreading another cold Paris winter, she stumbles upon an opportunity when Christian Morel engages her as a live-in companion to his beautiful young sister, Sylvie.
Maud is overjoyed by her good fortune. With a clean room, hot meals, and an umbrella to keep her dry, she is able to hold her head high as she strolls the streets of Montmartre. No longer hostage to poverty and hunger, Maud can at last devote herself to her art.
But all is not as it seems. Christian and Sylvie, Maud soon discovers, are not quite the darlings they pretend to be. Sylvie has a secret addiction to opium and Christian has an ominous air of intrigue. As this dark and powerful tale progresses, Maud is drawn further into the Morels' world of elegant deception. Their secrets become hers, and soon she is caught in a scheme of betrayal and revenge that will plunge her into the darkness that waits beneath this glittering city of light.


Praise For The Paris Winter: A Novel…

“Once the seeds of intrigue are planted, the scope of the book is expanded to encompass murderous plots, shady Parisian undersides, upper-class dealings, gems of history and gems – as in jewels. The women are heartwarming as friends and delightfully effective as crime fighters. With a twisty, well-crafted plot, this novel is rich in historical detail and robust with personality.” —Kirkus, starred review

“I must have breathed while reading THE PARIS WINTER, but I could not say when. Robertson's dark tale in the City of Light will haunt the reader long after closing its pages.” —Erika Robuck, Bestselling Author of Hemingway's Girl

“Rich as a ripened red wine, The Paris Winter intoxicates and satisfies the reader's darkest desires to be mysteriously entranced. With dazzling Belle Époque detail and nail-biting plot, Robertson stylishly paints a historical thriller of intrigue and treachery that will have you staying up late to the very last page drop. A compulsive read. I couldn't put it down.” —Sarah McCoy, author of the international bestseller The Baker's Daughter

“Imogen Robertson has written an enthralling novel. With its beguiling characters, deliciously twisted storyline, and setting in a city that is sometimes seductively glamorous, sometimes shivery with menace, The Paris Winter is an absolute treat for lovers of historical fiction.” —Margaret Leroy, author of The Soldier’s Wife

“Deliciously chilling and dangerous. The plot and characters are absolutely mesmerizing, drawing you in to their world like the opium itself.” —Karen Maitland, author of Company of Liars

“The Paris Winter is a wonderful novel, an utterly transportive and richly detailed amalgam of historical fiction and spellbinding thriller. Imogen Robertson brings Belle Époque Paris vividly to life in all its light and shadow, beauty and squalor, glory and treachery.” —Jennifer Chiaverini, author of Mrs. Lincoln's Dressmaker

“Dramatic and teeming with intrigue, The Paris Winter is a richly detailed historical novel that both thrills and satisfies.” —Shelf Awareness

“A charming, fast-paced thriller” —People, Book of the Week

“Both a romantic novel and a thriller, in the best possible ways.” —Spencer Daily Reporter

“Paints a dark, evocative portrait of the turbulent era, highlighting the limits placed on women . . . instead of centering on a conventional love story like similar historical works, the dramatic, intriguing, richly detailed historical novel is held together by the tensile strength of the women's friendship.” —Shelf Awareness for Readers, starred review

“Robertson is skillful at conjuring up not only a twisty, gripping plot, but also compelling characters . . . these multidimensional characters and Robertson's descriptions of Belle Epoque Paris – even of rats in ancient, flooding cellars – make the reader want to visit, even for a day.” —BookPage

IMOGEN ROBERTSON directed for TV, film, and radio before becoming a full-time author. She is the author several novels, including the Crowther and Westerman series. Imogen was shortlisted for the CWA Ellis Peters Historical Award 2011 and for the CWA Dagger in the Library Award 2012. The Paris Winter was partially inspired by Imogen's paternal grandmother, a free-spirited traveler who set off through Europe with money sewn into her skirts.
Loading...
or
Not Currently Available for Direct Purchase