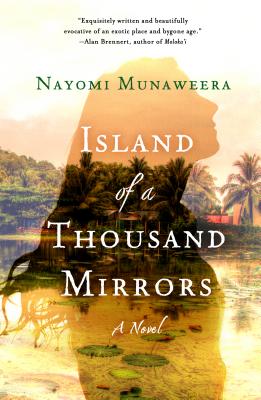 Before violence tore apart the tapestry of Sri Lanka and turned its pristine beaches red, there were two families; two young women, ripe for love with hopes for the future; and a chance encounter that leads to the terrible heritage they must reckon with for years to come.

One tragic moment that defines the fate of these women and their families will haunt their choices for decades to come. In the end, love and longing promise only an uneasy peace.

A sweeping saga with the intimacy of a memoir that brings to mind epic fiction like The Kite Runner and The God of Small Things, Nayomi Munaweera's Island of a Thousand Mirrors strikes mercilessly at the heart of war. It offers an unparalleled portrait of a beautiful land during its most difficult moments.

"Munaweera writes with ferocity, fire, and poetry of the incomprehensible madness of civil war and its effects upon those caught within it . . . A masterful, incendiary debut."—Jane Finch, author of White Oleander

NAYOMI MUNAWEERA was born in Sri Lanka and grew up in Nigeria. She emigrated to the United States in her early teens, and now lives in Oakland, CA. Island of a Thousand Mirrors won the 2013 Commonwealth Book Prize for the Asian Region and was longlisted for the 2012 Man Asian Literary Prize.
Loading...
or support indie stores by buying on