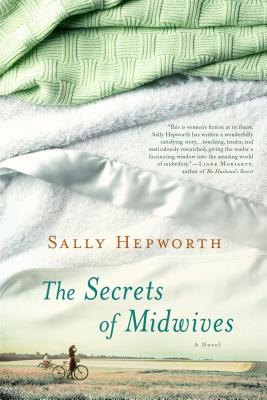 The Secrets of Midwives (Paperback)

"With empathy and keen insight, Sally Hepworth delivers a page-turning novel about the complex, lovely, and even heartbreaking relationships between mothers and daughters." —Emily Giffin

Three generations of women.
Secrets in the present and from the past.
A captivating tale of life, loss, and love...

Neva Bradley, a third-generation midwife, is determined to keep the details surrounding her own pregnancy-including the identity of the baby's father- hidden from her family and co-workers for as long as possible. Her mother, Grace, finds it impossible to let this secret rest. The more Grace prods, the tighter Neva holds to her story, and the more the lifelong differences between private, quiet Neva and open, gregarious Grace strain their relationship.

For Floss, Neva's grandmother and a retired midwife, Neva's situation thrusts her back sixty years in time to a secret that eerily mirrors her granddaughter's-one which, if revealed, will have life-changing consequences for them all. As Neva's pregnancy progresses and speculation makes it harder and harder to conceal the truth, Floss wonders if hiding her own truth is ultimately more harmful than telling it. Will these women reveal their secrets and deal with the inevitable consequences? Or are some secrets best kept hidden?

Praise For The Secrets of Midwives: A Novel…

Praise for The Secrets of Midwives:

“The Secrets of Midwives is women's fiction at its finest. Sally Hepworth has written a wonderfully satisfying story about three generations of midwives. It's touching, tender and obviously meticulously researched, giving the reader a fascinating window into the amazing world of midwifery. A delightful read.” ?Liane Moriarty, author of The Husband's Secret

“From the first page, I could not put The Secrets of Midwives down. Sally Hepworth delves into family secrets and family love in two different eras, adding mystery and plot twists at a breathless, exhilarating pace. I simply love this book!” ?Ann Hood, author of The Knitting Circle

“The Secrets of Midwives is a compelling exploration of life, loss, and love. Family secrets test the bonds between three women - Neva, her mother Grace, and her grandmother Floss - as they bring babies into the world and navigate their own complex paths. The story deepens and enlarges as it moves through their varied perspectives to its powerful conclusion.” ?Christina Baker Kline, author of The Orphan Train

“Hepworth's debut enchants…as three midwives unravel their secrets in the path of a classic New England storm…. combines vibrant and nuanced characters with a breathtaking plot.” ?Beatriz Williams, author of A Hundred Summers