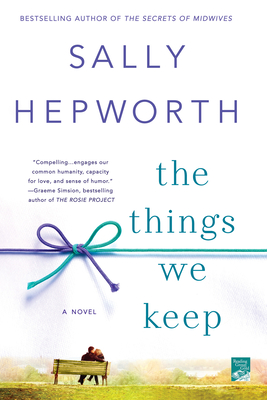 The Things We Keep

Anna Forster is only thirty-eight years old, but her mind is slowly slipping away from her. Armed only with her keen wit and sharp-eyed determination, she knows that her family is doing what they believe to be best when they take her to Rosalind House, an assisted living facility. But Anna has a secret: she does not plan on staying. She also knows there’s just one another resident who is her age, Luke. What she does not expect is the love that blossoms between her and Luke even as she resists her new life. As her disease steals more and more of her memory, Anna fights to hold on to what she knows, including her relationship with Luke.

Eve Bennett, suddenly thrust into the role of single mother to her bright and vivacious seven-year-old daughter, finds herself putting her culinary training to use at Rosalind house. When she meets Anna and Luke, she is moved by the bond the pair has forged. But when a tragic incident leads Anna’s and Luke’s families to separate them, Eve finds herself questioning what she is willing to risk to help them. Eve has her own secrets, and her own desperate circumstances that raise the stakes even higher.


Praise For The Things We Keep: A Novel…

Sally Hepworth has lived around the world, spending extended periods in Singapore, the United Kingdom and Canada. She is the author of The Secrets of Midwives, The Things We Keep, The Mother's Promise, The Family Next Door and The Mother-in-Law. Sally now lives in Melbourne with her husband, three children, and one adorable dog.
Loading...
or support indie stores by buying on
(This book is on backorder)