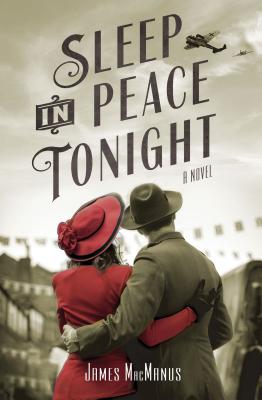 It's January 1941, and the Blitz is devastating England. Food supplies are low, Tube stations in London have become bomb shelters, and U-boats have hampered any hope of easy victory. Though the United States maintains its isolationist position, Churchill knows that England is finished without the aid of its powerful ally.

Harry Hopkins, President Roosevelt's most trusted adviser, is sent to London as his emissary, and there he falls under the spell of Churchill's commanding rhetoric---and legendary drinking habits. As he experiences life in a country under attack, Hopkins questions the United States' silence in the war. But back home FDR is paranoid about the isolationist lobby, and even Hopkins is having trouble convincing him to support the war.

As Hopkins grapples with his mission and personal loyalties, he also revels in secret clubs with newsman Edward R. Murrow and has an affair with his younger driver. Except Hopkins doesn't know that his driver is a British intelligence agent. She craves wartime action and will go to any lengths to prove she should be on the front line. This is London under fire, and it's only when the night descends and the bombs fall that people's inner darkness comes to light.

In Sleep in Peace Tonight, a tale of courage, loyalty, and love, and the sacrifices one will make in the name of each, James MacManus brings to life not only Blitz-era London and the tortuous politics of the White House but also the poignant characters and personalities that shaped the course of world history.


Praise For Sleep in Peace Tonight: A Novel…

“Sleep in Peace Tonight sneaks the reader behind the curtain of the grand stage that became the Second World War. James MacManus's meticulous research breathes life into historical figures that largely shaped our current world. Through its political and personal complexities, the story serves as a reminder of the victories, losses, and sacrifices that were made on every front.” —Kristina McMorris, bestselling author of The Pieces We Keep

“In Sleep in Peace Tonight, James MacManus brings a crucial period of WWII triumphantly to life, inviting us to understand the struggles and dilemmas of some of the key players of the time. His research is impeccable, and the story he tells is utterly engrossing. This is an enlightening and deeply pleasurable read.” —Margaret Leroy, author of The Soldier's Wife

“In a triumph of storytelling, James MacManus takes us on an exhilarating journey through the gritty streets of wartime London and into the inner sanctums of the larger-than-life leaders of the free world during England's darkest hour. Impeccably researched and brilliantly crafted, Sleep in Peace Tonight is a poignant love story, rich in historical detail and captivating characters caught up in the vortex of a world on the brink of destruction.” —Douglas W. Jacobson, author of Night of Flames and The Katyn Order

“With razor sharp prose and meticulous detail, James MacManus brings to life the tale of Harry Hopkins, the advisor to Franklin D. Roosevelt dispatched to London on the eve of the Second World War. In Sleep in Peace Tonight, MacManus chronicles Hopkins' remarkable, little known story as he finds himself in the confidence of Winston Churchill and newsman Ed Murrow – and in love with a woman half his age. Readers will savor this breathtaking ride, that is both a heady, heartbreaking romance and a chance to witness this critical moment in history from the shoulders of giants – fantastic!” —Pam Jenoff, author of The Kommandant's Girl

“James MacManus's riveting new novel, Sleep In Peace Tonight, focuses on Harry Hopkins, FDR's most trusted advisor, during the World War II years prior to Pearl Harbor. Rich with historical detail that doesn't overshadow the characters, real and fictional, or their stories, MacManus's fine book lingers in Blitz-era London, where Hopkins becomes intimately involved with Winston Churchill, Ed Murrow, and Hopkins's lovely driver, Leonora Finch. I predict that most readers, like me, won't be able to put this book down.” —Sarah Shaber, author of Louise's War

“Contrary to its title, this is a novel to keep you awake reading late into the small hours. Taking us to the heart of Churchill's struggle to bring the USA into the war in 1941, it weaves fact and fiction together, moving from the White House to society nightclubs of the London blitz. At the heart of this is the poignant character of Harry Hopkins, Roosevelt's advisor, and Leonora Finch, the British woman with whom he falls in love during some of the darkest dark days of the war. Their heartbreaking story is beautifully rendered. The novel catches you in its grip from the first page; it is pacey, full of fascinating detail and deeply moving. I feel enriched for having read it.” —Annie Murray, author of Chocolate Girls

“James MacManus writes with stark and vivid detail of wartime London--dark, shattered, nervous, yet defiant in the early days of the Blitz. Sleep in Peace Tonight is a quiet glimpse of the resilient people waiting and working on Britain's home front.” —Jessica Brockmole, author of Letters from Skye

“Impeccably researched and utterly compelling, Sleep in Peace Tonight brings the dramatic setting of Blitz-era London to life, moves us with a heartbreaking story of love during a time of war, and takes us on a fascinating journey that follows the powerful men who help shaped the course of history. Winston Churchill, Franklin D. Roosevelt, Harry Hopkins, and Edward R. Murrow literally jump off the page in this enlightening and memorable read.” —Ellen Marie Wiseman, author of The Plum Tree

“A satiating, unstoppable historical drama. In Sleep in Peace Tonight, James MacManus artfully weaves the true-life details of Harry Hopkins, President Roosevelt's advisor, into an insightful, provocative page-turner. Secrets of the heart and mind set against turbulent WWII London propel the reader forward at a powerful pace. Book clubs will devour this riveting story--as I did!” —Sarah McCoy, internationally-bestselling author of The Baker's Daughter

“Evoking Herman Wouk's pop-lit classic The Winds of War, this hypnotically entertaining tale gets the smoky, whiskey-fueled mood just right, all the while seamlessly melding the history and the star-crossed romance.” —Booklist

“Great fun for history buffs who enjoy imagining themselves in the bunkers.” —Kirkus Reviews

“The author has meticulously researched the history, and he captures the spirit of the time admirably in this entertaining novel.” —The Wall Street Journal

“A gripping, racy retelling of history. Closely researched, the book gives a vivid and moving picture of that period in 1941 when Britain really was facing the abyss and when the foundations of the UK-US special relationship were laid. London of the Blitz comes vividly to life, as does the angst-ridden figure of Roosevelt's special envoy to Churchill, Harry Hopkins. Compulsive reading." --Simon Mawer, author of The Glass Room "James MacManus has pulled off a dazzling feat of time travel. In the authentic voice of a journalist who has seen war, he brings London under the Blitz stunningly to life - the stench of the burning city, the ear-splitting blasts of falling bombs, the heart-stopping fear, the reckless pursuit of sex and whiskey and fleeting escape. Sleep in Peace Tonight is a riveting story of men and women struggling to save civilization and preserve their own humanity in the face of insurmountable odds.” —Ellen Feldman, author of The Unwitting

JAMES MACMANUS is the managing director of the Times Literary Supplement. He is the author of Black Venus, The Language of the Sea and Ocean Devil, which was made into a film starring Jonathan Rhys Meyers. He lives in London.
Loading...
or
Not Currently Available for Direct Purchase