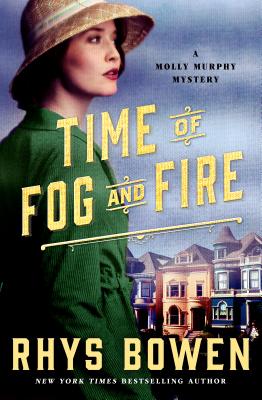 Time of Fog and Fire

Embarking on a cross-country journey with her young son, Molly can’t fathom what’s in store for her, but she knows it might be dangerous—in fact, it might put all of their lives at risk, in Rhys Bowen's Time of Fog and Fire.

Molly Murphy Sullivan's husband Daniel, a police captain in turn-of-the-century New York City, is in a precarious position. The new police commissioner wants him off the force altogether. So when Daniel’s offered an assignment from John Wilkie, head of the secret service, he’s eager to accept.

Molly can’t draw any details of the assignment out of him, even where he’ll be working. But when she spots him in San Francisco during a movie news segment, she starts to wonder if he’s in even more danger than she had first believed. And then she receives a strange and cryptic letter from him, leading her to conclude that he wants her to join him in San Francisco. Molly knows that if Daniel’s turning to her rather than John Wilkie or his contacts in the police force, something must have gone terribly wrong. What can she do for him that the police can’t? Especially when she doesn’t even know what his assignment is?

“Heartwarming.” —Kirkus Reviews on Away in a Manger

“Entertaining…Molly Murphy is endearing, and her quick wit and sharp mind make her a protagonist to root for…Well written and fast paced, with a twist that will leave readers truly surprised. This novel is not to be missed.” —RT Book Reviews (4 stars)

“Once again Rhys Bowen proves why she's one of the great mystery writers working today...Atmospheric, tightly plotted, heart pounding, this is Bowen at her best.” —Louise Penny on City of Darkness and Light

Rhys Bowen is the author of the award-winning Molly Murphy and Constable Evans mysteries. Her novels have garnered an impressive array of awards and nominations, including the Anthony Award for her novel For the Love of Mike and the Agatha Award for Murphy’s Law. Her books have also won the Bruce Alexander Historical Award and the Herodotus Award, and have been shortlisted for the Edgar, the Agatha, the Macavity, the Barry, and the Mary Higgins Clark Award. She has also written Her Royal Spyness, a series about a minor royal in 1930s England, and she is the author of several short stories, including the Anthony Award–winning “Doppelganger.” Her story “Voodoo” was chosen to be part of the anthology of the best of 50 years of Alfred Hitchcock Mystery Magazine. Ms. Bowen was born in Bath, England, and worked as an announcer and studio manager for the BBC in London, before moving to Australia and then California. It was here she started writing children’s and young adult novels, and then moved on to mysteries with the Constable Evans novels. When not writing she loves to travel, sing, hike, play her Celtic harp, and entertain her grandchildren. She lives in San Rafael, California.
or
Not Currently Available for Direct Purchase