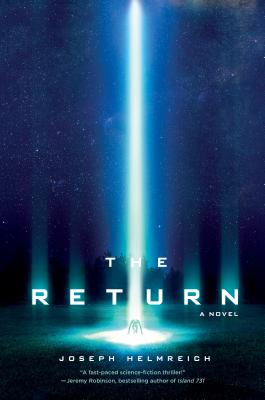 During a live television broadcast on the night of a lunar eclipse, renowned astrophysicist Andrew Leland is suddenly lifted into the sky by a giant spacecraft and taken away for all to see. Six years later, he turns up, wandering in a South American desert, denying ever having been abducted and disappearing from the public eye.

Meanwhile, he inspires legions of cultish devotees, including a young physics graduate student named Shawn Ferris who is obsessed with finding out what really happened to him. When Shawn finally tracks Leland down, he discovers that he’s been on the run for years, continuously hunted by a secret organization that has pursued him across multiple continents, determined to force him into revealing what he knows.

Shawn soon joins Leland on the run. Though Leland is at first reluctant to reveal anything, Shawn will soon learn the truth about his abduction, the real reason for his return, and will find himself caught up in a global conspiracy that puts more than just one planet in danger.

Equal parts science-fiction and globe-hopping thriller, Joseph Helmreich's The Return will appeal to fans of both, and to anyone who has ever wondered... what’s out there?


Praise For The Return: A Novel…

“Exploring the intergalactic consequences for humanity's cutting-edge science, and hubris, The Return is fast-paced science-fiction thriller that's as easy to read as it is intelligent. Highly recommended.” —Jeremy Robinson, international bestselling author of Island 731 and Project Nemesis

“The Return is a great book with a fascinating premise. I couldn’t wait to see what happened next!” —Chris Kuzneski, New York Times bestselling author of The Hunters

"The Return is as intelligent as it is thrilling. Helmreich is a masterful storyteller, weaving a surreal and convincing tale of speculative fiction reminiscent of Ursula K. Le Guin. Whole worlds are built and taken apart before our eyes, and yet the writing remains achingly human, authentically touching. A stunning first novel." —Joshua Gaylord, author of When We Were Animals

"This intelligent thriller comes with a fast-moving plot." —Kirkus Reviews

JOSEPH HELMREICH has contributed writing to Every Day Fiction and New York Press and is the co-author of Warring Parents, Wounded Children, and the Wretched World of Child Custody (Greenwood Press, 2007). He is a graduate of Rutgers University, where he studied philosophy and film, and spent his early twenties working or interning on film and television projects, such as Garden State, Late Night With Conan O’Brien, and No Direction Home: Bob Dylan, before becoming a script-reader for The Weinstein Company, an experience which helped inspire him to become an author. In addition to his writing, Helmreich is also a voice-over actor, illustrator, ventriloquist and member of alternative folk duo, Honeybrick. He lives in New York City and works in film distribution.
Loading...
or support indie stores by buying on