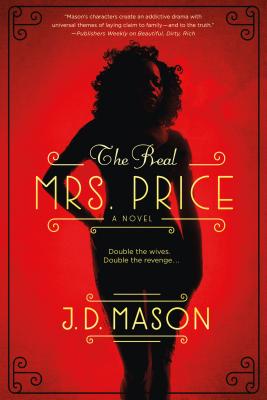 Lucy Price is living the American dream. She has been married to her successful husband and businessman, Edward Price for a year and couldn’t be happier until she learns that Eddie is a dangerously ruthless man, heavily involved in illegal activities that threaten not only her marriage, but her life. Eddie abruptly disappears, but not before warning Lucy that if she wants to keep breathing she'd better keep her mouth shut. Six months later, word of her husband surfaces when she learns that he is presumed murdered in a small Texas town, apparently killed by his “wife”, Marlowe Price.

Marlowe is no stranger to trouble. An outcast in her own community for being one of those "hoodoo women," who can curse you or cast you under her beguiling spell, Marlowe is shunned at every turn. Six months ago, a whirlwind romance in Mexico led Marlowe to marry the man she thought she’d spend the rest of her life with. For Marlowe and Eddie, there is no such thing as trouble in paradise. But late one night, when Marlowe witnesses her husband putting the body of a dead man in the trunk of his car, the illusion comes crashing down around her and she knows she has to move fast before the devil comes calling once again.

Now, Lucy and Marlowe must come together to find out where and who Eddie really is, and help each other through the threat he poses. There's nothing more dangerous than a woman scorned...except for two women scorned who are willing to put their pasts behind them and band together to take one bad man down...

“Readers are taken on a penomenal journey that elicits gasps when the bombshell hits. Mason pens another astounding work.” —RT Book Reviews on Crazy, Sexy, Revenge

“Taut, suspenseful and unforgettable. Run, do not walk, and get this book!” —Zane, New York Times bestselling author on Beautiful, Dirty, Rich

“Mason's characters create an addictive drama with universal themes of laying claim to family--and to the truth.” —Publishers Weekly on Beautiful, Dirty, Rich

“Effortlessly leaves no stone unturned in the lives of these tormented characters. Mason will take your breathe away.” —Romantic Times Book Reviews on You Gotta Sin to Get Saved

J.D. MASON is the author of That Devil's No Friend of Mine, You Gotta Sin to Get Saved, This Fire Down in My Soul, Don't Want No Sugar, And On the Eighth Day She Rested, and One Day I Saw a Black King. She lives in Denver, Colorado with her two children."Mason's contributions to African American literature have dealt with life's problems head-on..."--American Library Association "Mason has become a major name in African American fiction. Her stark portrayals of her characters and their innermost thoughts bring the readers right into the emotional center of the story. Those who enjoy Carl Weber and Eric Jerome Dickey will add Mason to their list of favorites." --Booklist
Loading...
or
Not Currently Available for Direct Purchase