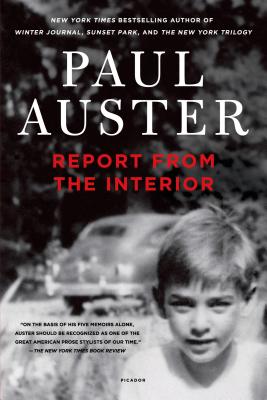 Report from the Interior

IN THE BEGINNING, EVERYTHING WAS ALIVE. THE SMALLEST OBJECTS WERE ENDOWED WITH BEATING HEARTS, AND EVEN THE CLOUDS HAD NAMES.
Having recalled his life through the story of his physical self in Winter Journal, internationally acclaimed novelist Paul Auster now remembers his development from within, through the encounters of his interior self with the outer world.
In Report from the Interior, from his baby's-eye view of the man in the moon to his dawning awareness of the injustices in American life, Auster charts his intellectual, political, and moral journey as he inches his way toward adulthood from the postwar fifties and into the turbulent sixties. He then recapitulates that journey through an album of pictures, answering the challenge of autobiography in ways rarely, if ever, seen before.


Praise For Report from the Interior…

“On the basis of his five memoirs alone, Auster should be recognized as one of the great American prose stylists of our time.” —The New York Times Book Review

“A high-wire explication of his inner life...Auster's phenomenal literary powers are generated by his equal fluency in matters emotional and cerebral. Here the origins of that sustaining duality are revealed.” —Donna Seaman, Booklist

“Report from the Interior is a fetchingly original...examination of what it feels like to be a young person in a puzzle-world that still hasn't fallen into place. We all felt it as children; Auster has...put it into words.” —Richmond Times-Dispatch

“[Auster is] the most distinguished American writer of the generation below Updike and Bellow, indeed its only author...with any claim to greatness.” —The Spectator (London)