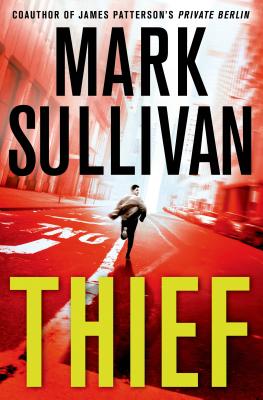 Robin Monarch is a man with a complicated past and dangerous present. He's been a soldier, a CIA agent, a freelance operative but first and foremost, Robin Monarch is a thief of the highest order. Orphaned at twelve, Monarch originally stole for survival, then he stole for his friends and cohorts, now he steals to order, and to give back to the to the woman who saved his life many years ago.

With the help of his team, Monarch breaks into the legendary Christmas party of Beau Arsenault, a shady investor and behind-the-scenes player at the very highest levels of power politics. Arsenault is not above bending or breaking the rules if there's illicit profit to be made. Monarch has decided that those illicit profits will be better used to take care of orphans and street kids. Using the party as cover to break into Arsenault's secret vaults, Monarch comes away with two unexpected things. One is a bullet—he gets shot when he's caught trying to escape with tens of millions of negotiable instruments. The second is a lead on what might be his most audacious exploit ever. A previously undiscovered tribe in South America may well have the secret to the most sought after knowledge in history—that of eternal life. And Robin Monarch must use all his skills—as an operative, as a thief—to keep this secret from falling into the worst possible hands.

“Terrific page-turner...Sullivan has crafted a remarkable antihero in Monarch, and the mix of action with thought provoking insight into what constitutes good or evil makes this a winner on every level.” —Booklist (starred review) on Thief

“Sullivan has created a fine adventure-thriller hero in Monarch, who fits perfectly into the Ludlum or Vince Flynn mode. The action and the surprises are nonstop. Readers will demand the next one in the series, pronto.” —Booklist on Outlaw

“[Sullivan] takes his game to an entirely new and higher level. He never hits a low point, never trips, and never stops…the conclusion will leave you impatiently waiting for the next installment.” —Bookreporter.com on Rogue

“A true juggernaut of a thriller, pure adrenaline in print…with the creation of Robin Monarch, Sullivan's crafted a Jason Bourne for the new millennium.” —James Rollins on Rogue

“This lightning-fast read brings to mind Robert Ludlum and Mission Impossible--and will definitely appeal to adrenalin junkies.” —Booklist on Rogue

“Thriller fans fond of high-stakes rescue scenarios will be more than satisfied.” —Publishers Weekly on Outlaw