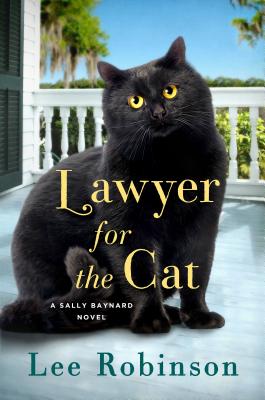 Lawyer for the Cat

Sally Baynard is one of the best lawyers around. In the years since her divorce from Family Court Judge Joe Baynard, she dedicated herself to representing the worst and craziest Charleston, S.C. had to offer. But none of the murderers, burglars, or angry divorcing clients compared to Sherman, the dog her ex-husband appointed her to represent. Although the miniature Schnauzer found his way into her heart (and brought his handsome vet Tony along too), his case was a thorny one. With that business out of the way, Sally is happy to move back to non-canine clients... until a probate judge asks her about a cat.

Agreeing to represent Beatrice, a black cat who's the beneficiary of a multi-million dollar trust and a plantation, Sally must put her wit, charm, and brains to the test, choosing among three colorful potential caregivers while dodging the former owner's angry son. Meanwhile, Sally must juggle the demands of the court with those of her aging mother and make a decision about Tony, who wants to get more serious. Lee Robinson's Lawyer for the Cat is Southern women's fiction at its most delightful, featuring strong, smart characters, a charming setting, and plenty of adorable critters.


Praise For Lawyer for the Cat: A Sally Baynard Novel…

"Sarah is indeed a bright lawyer and and Robinson, a respected Charleston attorney herself, doesn’t dummy-down the legal ethics or professionalism of her heroine in this legal caper that engages the intellect as well as the emotions" - Booklist

Praise for Lawyer for the Dog:

"The frequently funny and sometimes poignant tale of an attorney who is appointed by the court to represent a pet Schnauzer in a couple’s acrimonious divorce."—San Antonio Express-News, "Books of the Year in 2015"

“Likable secondary characters surround an even more likable central character, creating an almost instant emotional connection. Friendships, a previous marriage, and dedication to her profession are well supported and feel genuine and add depth... with a satisfyingly happy ending, Robinson gets it right for readers who want something light and lively but with substance.” —Booklist

“Treat yourself to a delightful story, and then wait patiently for Lee Robinson's next novel-we hear it will feature our lawyer friend representing a cat.” —Hudson Valley News

“A fast and very funny story...There's fun to be had from this goofy situation, and complications ensue in true romantic comedy style. Add an ailing mother, an irresistible veterinarian and a cast of needy clients and the games begin...Bring on the sequels!” —The Charleston Post and Courier

“The poignant and often humorous tale of an attorney who is appointed by the court to represent a pet Schnauzer in a couple's acrimonious divorce.” —San Antonio Express-News

"The story is one that will resonate with women of a certain age. There are parts that are touching, humorous and sad...The ending brings it all together beautifully."—Examiner.com

LEE ROBINSON is the author of Lawyer for the Cat. She practiced law for over 20 years in Charleston, S.C., where she served as executive director of a legal services agency and later worked in private practice, concentrating on family law. She was elected the first female president of the Charleston Bar Association and received the Bar Association’s award for her work in public interest law. She lives on a small ranch in the Texas hill country.
Loading...
or
Not Currently Available for Direct Purchase