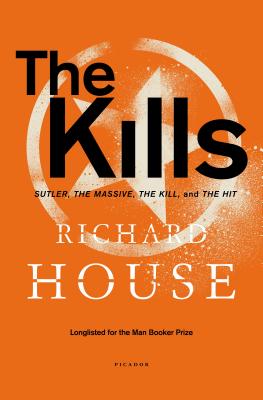 Sutler, The Massive, The Kill, and The Hit

A MASTERWORK OF INTERNATIONAL INTRIGUE SET IN THE ASHES OF WAR-TORN IRAQ, ITALY, AND AREAS IN BETWEEN.

Richard House's The Kills is an epic novel of crime and conspiracy told in four books. It begins with a man on the run and ends with a burned body. Moving across continents, characters, and genres, there will be no more ambitious or exciting novel published this year.


Praise For The Kills: Sutler, The Massive, The Kill, and The Hit…

"One of the best novels about the collateral damage of the second U.S.-Iraq war, The Kills is also a tale of horror, fate, the arbitrariness of interpersonal connections, and the mysteries we can never solve. It's by far the most underrated novel on this list and a must for fans of 2666." --Jeff VanderMeer, bestselling author of Annihilation

“A symphony in four distinct novel-length movements….Perfect for folks whose idea Thanksgiving or Christmas breaks involve curling up with a fat, rewarding read.” —Passport

“The Kills challenges what a thriller can be…Despite the influence of Roberto Bolaño's 2666, Sutler calls the protagonist of another open-ended epic to mind: Tyrone Slothrop of Thomas Pynchon's Gravity's Rainbow, a character who disappears from the book but whose presence can be felt on every page. The Kills has similar goals as Gravity's Rainbow: to expose the greed and corruption that thrives in the economy of war. House may not have written a conventional thriller, but The Kills is a thrilling work of art by a writer at the top of his game.” —Jim Ruland, Los Angeles Times

“The Kills offers up all the suspense and violence of a thriller, but House's tetralogy is much more than an exciting story.” —Tulsa World

“The Kills is in part a comprehensive, Tom Wolfe-esque plunge into the underworld of military contracting. It's also a shrewd, globe-trotting thriller in the vein of John le Carré...Reading it will make quick work of a cross-country flight or a weekend at the beach.” —Sam Sacks, The Wall Street Journal

“A long read, and worth every minute....House's brilliant structure allows him to maintain maximum suspense while following his characters and ideas across a vast moral, political, and philosophical landscape. (The effect is not unlike Roberto Bolaño's in 2666, an inspiration for The Kills.) The novel is ambitious, expansive, beautifully written, and gripping, with intimations of danger shimmering behind even the simplest gesture. Imagine Philip Petit walking a tightrope across the Grand Canyon. The Kills is that dazzling.” —NPR.org

“Huge and hugely ambitious...House is one of the few British writers taking on the challenge of constructing a literary novel through the prism of a crime novel...House creates a surreal, Mesopotamian Catch-22...The Kills, with its ambition, linguistic stylization, and global reach, is exactly the kind of novel the Booker Prize (and the reading public) needs.” —Los Angeles Review of Books

“The thousand-page novel you'll actually want to read...Richard House's THE KILLS comprises four separate novels--addictive, interlocking thrillers that echo the political intrigue of Graham Greene and the innovative structures of Roberto Bolaño....There's a summer's worth of white-knuckle page turning here, but you'll probably need only a week.” —Details

“The Kills is not a typical thriller, but it has the pace and energy associated with the genre and it's already being compared to the work of John le Carre....House has taken a familiar form and made it fresh....Richly detailed, evocative prose.” —Out

“This is the kind of book that classics are made off.” —Amos Lassen, ReviewsByAmosLassen.com

“The Kills is a hugely ambitious and mesmerizing work, fresh and entertaining. Richard House is the real deal.” —Olen Steinhauer, New York Times-bestselling author of The Tourist and An American Spy

“This is a staggering achievement....Highly recommended.” —Daily Mail (London)

“Engrossing…House's four-part, 1,000-page novel of corruption and murder is a heady page-turner. Already a hit in the U.K., The Kills trots the globe with professional killers and military contractors, and earns its comparisons to John le Carré with a healthy dose of political intrigue.” —Matthew Love, Time Out New York

“A sprawling, subterranean, sometimes-surreal novel of the new world order, longlisted for the Man Booker Prize, in which Bolaño and Pynchon wave in passing as we dodge between IEDs and sinister plots....Ambitious and often brilliant.” —Kirkus Reviews

“The Kills...takes you on a hell of a ride.” —The Daily Telegraph (London)

“The Kills by Richard House: The second section of this four-part novel is callexd 'The Massive'; it's a title that could have stood for the whole. House's sprawling quadruple-decker, longlisted for the Booker Prize, is a literary thriller set against the background of the Iraq War.” —Garth Risk Halberg, The Millions' Most Anticipated Books of 2014

“Richard House has written a damn good book....The Kills is possibly the most eyebrow-raising entry on this year's Booker longlist....He is not your average novelist, but is also a filmmaker, artist, and magazine editor....If this all seems hifalutin, rest assured: The Kills is still all about spinning a good yarn.” —The Sunday Times (London)

“A gigantic experiment, bracing, thrilling and worthy of a medal for narrative heroism, Richard House's four-volume The Kills plays an epic set of variations on the shadow war for loot and influence behind the chaos of Iraq.” —Boyd Tonkin, The Independent (London), Books of the Year

“The novel I enjoyed most was Richard House's sensational pile-driver, The Kills.” —Philip Hensher, The Guardian (London), Best Books of the Year

“Richard House's The Kills was the novel that impressed me most: a terrific unbuckled ride through global and intimate catastrophes, blood and billions.” —Philip Hensher, The Spectator (London), Best Books of the Year

Richard House is a writer, artist, filmmaker and teacher. He is the author of two short dark novels, Bruiser and Uninvited, published by Ira Silverberg in the Serpents Tail High Risk series. He is a member of the Chicago-based collaborative, Haha, whose work has appeared at the New Museum, New York; the Museum of Contemporary Art, Chicago; and the Venice Biennale. He teaches at the University of Birmingham, and is the editor of Fatboy Review, a digital literary magazine.
or support indie stores by buying on