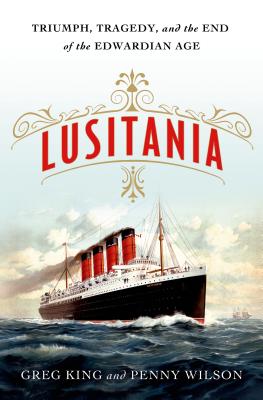 On the 100th Anniversary of its sinking, King and Wilson tell the story of the Lusitania's glamorous passengers and the torpedo that ended an era and prompted the US entry into World War I.

Lusitania: She was a ship of dreams, carrying millionaires and aristocrats, actresses and impresarios, writers and suffragettes – a microcosm of the last years of the waning Edwardian Era and the coming influences of the Twentieth Century. When she left New York on her final voyage, she sailed from the New World to the Old; yet an encounter with the machinery of the New World, in the form of a primitive German U-Boat, sent her – and her gilded passengers – to their tragic deaths and opened up a new era of indiscriminate warfare.

A hundred years after her sinking, Lusitania remains an evocative ship of mystery. Was she carrying munitions that exploded? Did Winston Churchill engineer a conspiracy that doomed the liner? Lost amid these tangled skeins is the romantic, vibrant, and finally heartrending tale of the passengers who sailed aboard her. Lives, relationships, and marriages ended in the icy waters off the Irish Sea; those who survived were left haunted and plagued with guilt.

In Lusitania: Triumph, Tragedy, and the End of the Edwardian Age, authors Greg King and Penny Wilson resurrect this lost, glittering world to show the golden age of travel and illuminate the most prominent of Lusitania's passengers. Rarely was an era so glamorous; rarely was a ship so magnificent; and rarely was the human element of tragedy so quickly lost to diplomatic maneuvers and militaristic threats.

“This is a solid, fascinating account of a ship, its passengers, and its terrible fate” —PublishersWeekly.com

“[T]heir exploration of the facts surrounding the mystery is the primary pleasure of the book... but the real joy is in the authors' detective work and attention to detail.” —Kirkus

Greg King is the author of seventeen internationally published works of history, including Lusitania and Twilight of Empire. His work has appeared in the Washington Post, Majesty Magazine, Royalty Magazine and Royalty Digest. He lives in the Seattle area.

PENNY WILSON is the author of six internationally published works of history on late Imperial Russia. Her historical work has appeared in Majesty Magazine, Atlantis Magazine, and Royalty Digest. She lives in Southern California with her husband and three Huskies.
Loading...
or
Not Currently Available for Direct Purchase