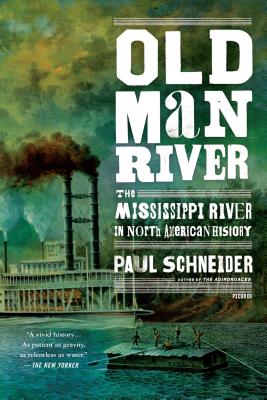 Old Man River, Paul Schneider's exploration of America's great waterway—taking the reader from the Mississippi River's origins to its polluted present and tracing its prehistory, geology, and cultural and literary histories—is as vast as its subject.

The fascinating cast of characters includes the French and Spanish explorers de Soto, Marquette and Joliet, and the incomparable La Salle; George Washington fighting his first battle in an effort to secure the watershed; the birth of jazz and blues; and literary greats like Melville, Dickens, Trollope, and, of course, Mark Twain.

Pirates and riverbats, gamblers and slaves, hustlers and landscape painters, loggers and catfishers, tourists and missionaries: The Mississippi is a river of stories and myth. It's Paul Robeson sitting on a cotton bale, Daniel Boone floating on a flatboat, and Paul Bunyan cutting trees in the neighborhood of Little House in the Big Woods.

Half-devastated product of American ingenuity, half-magnificent natural wonder, it is impossible to imagine America without the Mississippi.

Paul Schneider is the acclaimed author of Bonnie and Clyde, Brutal Journey, The Enduring Shore, and The Adirondacks, a New York Times Book Review Notable Book. He and his family live in West Tisbury, Massachusetts.

“Stunning...With such an expert hand on the tiller, Old Man River is an astonishing journey.” —Publishers Weekly (starred review)

“Schneider's book stands out....It's another reminder of how we took the river's heritage for granted for far too long, and why it's worth scrambling today to reclaim and maintain as much of it as we can.” —Minneapolis Star Tribune