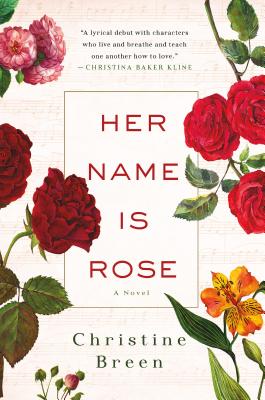 Her Name Is Rose

People used to say Iris Bowen was beautiful, what with the wild weave of her red hair, the high cheekbones, and the way she carried herself like a barefoot dancer through the streets of Ranelagh on the outskirts of Dublin city. But that was a lifetime ago.

In a cottage in the west of Ireland, Iris--gardener and mother to an adopted daughter, Rose--is doing her best to carry on after the death of her husband two years before. At the back of her mind is a promise she never intended to keep, until the day she gets a phone call from her doctor.

Meanwhile, nineteen-year-old Rose is a brilliant violinist at the Royal Academy in London, still grieving for her father but relishing her music and life in the city. Excited but nervous, she hums on the way to an important master class, and then suddenly finds herself missing both of her parents when the class ends in disaster.

After the doctor's call, Iris is haunted by the promise she made to her husband--to find Rose's birth mother, so that their daughter might still have family if anything happened to Iris. Armed only with a twenty-year-old envelope, Iris impulsively begins a journey into the past that takes her to Boston and back, with unexpected results for herself and for Rose and for both friends and strangers.

Intimate, moving, and witty, Christine Breen's Her Name is Rose is a gorgeous novel about what can happen when life does not play out the way you expect.


Praise For Her Name Is Rose: A Novel…

“A poignant tale of love and loss between an adoptive mother and daughter....Breen's characters immediately invite the reader to go on a heartwrenching journey that's enhanced by her skillful plotting and authentic, lyrical descriptions of the Emerald Isle. A moving first novel.” —Publishers Weekly - starred review

“Breen's emotional tale is perfect for fans of complex novels....There are more than several surprises, which keep the engaging plot moving freely, and our admirable heroine, Rose, teaches us exactly what the scent of a woman is all about.” —RT Book Reviews

“A warmhearted and poignant story. Fans of Maeve Binchy will appreciate this witty story of family, acceptance, and the power of belonging.” —Booklist

“In this lyrical debut novel, Christine Breen weaves a tale about the ties that bind -- biological, legal, emotional -- and the many varieties of devotion. The story moves fluidly from the west coast of Ireland to London to Boston and back, stopping in gardens and museums and concert halls along the way, accumulating characters who live and breathe and teach each other how to love.” —Christina Baker Kline

“Christine Breen creates an emotional story that tenderly explores the depth of a mother's love. You will root for her characters as they lift you up with their compassion and goodness.” —Diane Chamberlain

“This is a novel that will appeal to Anne Tyler fans. Christine Breen has a lovely feel for language and great affection for her characters. There's something humane and kind about the way she writes, which is a great quality. It's hard to do 'nice' and Breen does it very well.” —Jane Harris

CHRISTINE BREEN was born in New York and educated in Boston and Dublin, where she received an MA in Irish Literature. She is an artist, homeopath, gardener, and mother of two children. She lives in Kiltumper, Ireland with her husband, the novelist Niall Williams, in the cottage where her grandfather was born. Her Name is Rose is her first novel.
Loading...
or
Not Currently Available for Direct Purchase