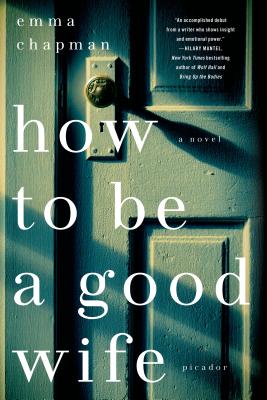 How To Be a Good Wife (Paperback)

Marta and Hector have been married for a long time. Through the good and bad; through raising a son and sending him off to life after college. So long, in fact, that Marta finds it difficult to remember her life before Hector. He has always taken care of her, and she has always done everything she can to be a good wife—as advised by a dog-eared manual given to her by Hector's aloof mother on their wedding day.

But now, something is changing. Small things seem off. A flash of movement in the corner of her eye, elapsed moments that she can't recall. Visions of a blonde girl in the darkness that only Marta can see. Perhaps she is starting to remember—or perhaps her mind is playing tricks on her. As Marta's visions persist and her reality grows more disjointed, it's unclear if the danger lies in the world around her, or in Marta herself. The girl is growing more real every day, and she wants something.

EMMA J. CHAPMAN was born in 1985 and grew up in Manchester, England. She studied English Literature at the University of Edinburgh, followed by a Masters in Creative Writing at Royal Holloway, University of London.  After university, she travelled solo in Scandinavia, where she learned to camp, bathe in fjords, and carry everything she needed.  She is currently living in Perth, Western Australia. How to Be a Good Wife is her first novel.

Praise For How To Be a Good Wife: A Novel…

“An accomplished debut from a writer who shows insight and emotional power.” —Hilary Mantel, New York Times bestselling author of Wolf Hall and Bring Up the Bodies

“On the surface the book is a highly competent, creepy little chiller, but beneath, like a silent, bolted, and half-dark room, there's a much bigger, equally disconcerting story about the nature of feminine experience.” —Hilary Mantel, New York Times–winning author of author of Wolf Hall and Bring Up the Bodies

“[The] claustrophobic, interior-driven narrative harks back to Charlotte Perkins Gilman's disturbing feminist classic The Yellow Wallpaper, or even Ibsen's A Doll's House.” —The Guardian (London)

“How To Be a Good Wife is at once claustrophobic, startling and hauntingly beautiful. It's that amazing, awful kind of book that will stay with you long after you wish it would let you go.” —Liza Klaussmann, author of Tigers in Red Weather

“A compelling, twisty tale of deception and distrust. Beautifully written, and very clever.” —Elizabeth Haynes, author of Into the Darkest Corner

What did you think was the significance of the setting of the novel? Why do you think it is specifically unnamed?

Hector is an ambiguous character throughout the book. Did your views of him change as the book progressed?

Marta can be considered an unreliable narrator. Were there moments in the book when you didn’t trust her? Why?

A book Marta was given as a wedding gift left a lasting impression on her. Why do you think she played by the ‘rules’ according to the book?

Do you think Marta’s interpretations of events were correct?

Can you see things from Hector’s side? Who did you believe?

The ending of the novel is ambiguous. Did you think this was the right ending for Marta?

The novel examines three generations of women from the same family. Do you think it raises larger questions about what it is to be a woman and to fulfill certain roles?

If so, how did you respond to the questions it raised? Do you think the writer has an opinion on how the questions should be answered?