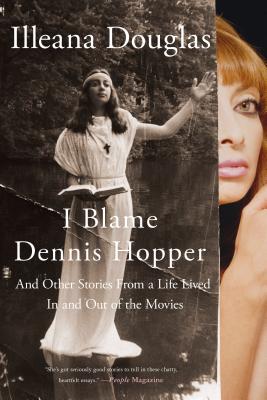 From award-winning actress Illeana Douglas comes a memoir about learning to survive in Hollywood while staying true to her quirky vision of the world.

In 1969 Illeana Douglas' parents saw the film Easy Rider and were transformed. Taking Dennis Hopper's words, "That's what it's all about man" to heart, they abandoned their comfortable upper middle class life and gave Illeana a childhood filled with hippies, goats, free spirits, and free love. Illeana writes, "Since it was all out of my control, I began to think of my life as a movie, with a Dennis Hopper-like father at the center of it."

I Blame Dennis Hopper is a testament to the power of art and the tenacity of passion. It is a rollicking, funny, at times tender exploration of the way movies can change our lives. With crackling humor and a full heart, Douglas describes how a good Liza Minnelli impression helped her land her first gig and how Rudy Valley taught her the meaning of being a show biz trouper. From her first experience being on set with her grandfather and mentor-two-time Academy Award-winning actor Melvyn Douglas-to the moment she was discovered by Martin Scorsese for her blood-curdling scream and cast in her first film, to starring in movies alongside Robert DeNiro, Nicole Kidman, and Ethan Hawke, to becoming an award winning writer, director and producer in her own right, I Blame Dennis Hopper is an irresistible love letter to movies and filmmaking. Writing from the perspective of the ultimate show business fan, Douglas packs each page with hilarious anecdotes, bizarre coincidences, and fateful meetings that seem, well, right out of a plot of a movie.

I Blame Dennis Hopper is the story of one woman's experience in show business, but it is also a genuine reminder of why we all love the movies: for the glitz, the glamor, the sweat, passion, humor, and escape they offer us all.

Praise For I Blame Dennis Hopper: And Other Stories from a Life Lived In and Out of the Movies…

"In this sublime series of essays, Douglas revels in her dual roles as both participant and observer, never losing her awe of the actors and directors she has met along the way.Funny, candid, juicy, gossipy, Douglas’ insider look at the film industry charms with its “pinch me, I’m dreaming” sweetness while imparting hard-won and valuable lessons about following one’s true calling."
-Booklist, Starred Review

"In other words, she's got seriously good stories to tell in these chatty, heartfelt essays" - Kim Hubbard,People Magazine

"It’s Douglas’ head-over-heels madness for the movies that illuminates the text like a projector bulb through a filmstrip, from her parents’ decision to run a hippie commune after being bewitched by Dennis Hopper in Easy Rider, to Douglas’ own obsession with actors like Lee Marvin and Richard Dreyfuss, to her sometimes “delusional” confidence that she was born to be a star. Douglas recounts her life and work with a perfect mix of self-deprecation and glowing pride. Reading it feels like listening to the magnetic storyteller herself—and it’s enough to make you fall in love too. A–" - Entertainment Weekly

"Humorous, delightful, and wholly entertaining. Douglas delves into all the wonderfully serendipitous tales that got her to the place she as a child always wanted to be, all while charming the hell out of us." - Elle Magazine

“Illeana Douglas takes you through her years in Hollywood and beyond the same way she experienced them - by happy, hilarious accident. The revelations fly off the pages of this book are cringe-inducing, gut-busting and terrifying, usually all at once.” —Patton Oswalt, New York Times bestselling author of ZOMBIE, SPACESHIP, WASTELAND

“I've talked to Illeana Douglas about her life. Her family roots are crazy, groovy, harsh and a bit glamorous. I'm thrilled she's wrangled that into prose form. She's quirky, hilarious and deep. I love her. I've always loved her. Haven't we all?” —Marc Maron, Comedian and bestselling author of Attempting Normal

“Illeana Douglas is an incredibly talented, smart and funny storyteller. This book is compelling to read from start to finish. She either knows or has worked with so many significant names in film, that in researching, she broke my IMDB.” —Bob Saget, actor and author of the New York Times bestselling memoir Dirty Daddy

“Illeana asked me for a quote, so I suggested about a hundred dollars....Illeana is not only a child of the movies, but also a grandchild. She writes beautifully and movingly about how she came to be who she is.” —Eric Idle, Founding member of Monty Python and Tony Award winning writer of Spamalot

“Illeana has done what no other movie memoir has ever achieved; she takes us on a journey through the personal, the chaotic, the droll, the ecstatic, the hilarious, the surreal and moving life in moving pictures, hers, and ours. As beautiful as it is exhilarating, I Blame Dennis Hopper not only gives us a rich texture of the life of an American girl coming of age in a wild time, but the most perfect look I've ever read of life on the set through a filmmakers eye. Gorgeous.” —Allison Anders, Award-winning director of Grace of My Heart and Gas Food Lodging

“I Blame Dennis Hopper is genius. I couldn't put it down. It was like having a great companion. Illeana completely captures the enchantment of film in a charming and hilarious way. More than that, it reminded me of my own passion for movies and of acting. Very, very inspirational.” —Jeff Goldblum

“Illeana is far beyond just an actress, she's a student of all things cinema. This book is funny, poignant, and at moments, surprising. This is definitely one of those times where you should read the book before you see the movie. (See what I did there?)” —Adam Carolla, New York Times bestselling author of Not Taco Bell Material and President Me

“I devoured this book as if it were a giant box of popcorn! It isn't easy to put your thoughts, hopes, dreams, and disappointments into words, but Illeana Douglas has done it with equal parts candor and humor. Best of all, she details the special relationship she had with her grandfather, the great Melvyn Douglas-including the time she got to visit him on the set of Being There. I thoroughly enjoyed this disarming memoir.” —Leonard Maltin, film critic and bestselling author

“Illeana has always been known as the thinking man's sex symbol. This book makes it clear why.” —James Woods