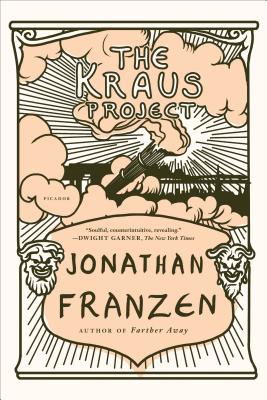 A hundred years ago, the Viennese satirist Karl Kraus was among the most penetrating and prophetic writers in Europe: a relentless critic of the popular media's manipulation of reality, the dehumanizing machinery of technology and consumerism, and the jingoistic rhetoric of a fading empire. But even though his followers included Franz Kafka and Walter Benjamin, he remained something of a lonely prophet, and few people today are familiar with his work. Thankfully, Jonathan Franzen is one of them.

In The Kraus Project, Franzen not only presents his definitive new translations of Kraus but also annotates them spectacularly, with supplementary notes from the Kraus scholar Paul Reitter and the Austrian writer Daniel Kehlmann. Kraus was a notoriously cantankerous and difficult author, and in Franzen he has found his match: a novelist unafraid to voice unpopular opinions strongly, a critic capable of untangling Kraus's often dense arguments to reveal their relevance to contemporary America. Interwoven with Franzen's survey of today's cultural and technological landscape is an intensely personal recollection of the author's first year out of college, when he fell in love with Kraus.

Painstakingly wrought, strikingly original in form, The Kraus Project is a feast of thought, passion, and literature.


Praise For The Kraus Project: Essays by Karl Kraus…

“Engrossing, highly original...As a declared enemy of the easy response in an instant-access culture, Franzen finds in the unduly neglected Kraus a model of how to provoke readers while at the same time getting them to do some work.” —The New York Times Book Review

“It is the achievement of The Kraus Project to provide a solid picture of what makes Kraus incomparable and, paradoxically enough, relevant.” —Bookforum

“Kraus is one of the most uproarious and relevant writers who ever lived.” —Slate

Karl Kraus (1874–1936) was an Austrian satirist, playwright, poet, aphorist, and journalist. From 1899 until his death, he published the literary and political review Die Fackel.
Loading...
or support indie stores by buying on