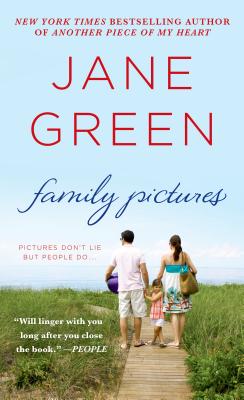 Who can you trust if not the ones you love? That is the question at the heart of Family Pictures, an emotional, page-turning story about what it means to be a family from New York Times bestselling author, Jane Green

Sylvie and Maggie are two women living on opposite coasts with children about to leave the nest for school. Both are in their forties with husbands who travel more than either would like. The looming emptiness of their respective homes has left them feeling anxious and lonely, needing their husbands to be home now more than ever. It isn't until Eve, Sylvie's daughter, happens to befriend Maggie's daughter that the similarities between these two women become shockingly real. A huge secret has remained well hidden for years until now-and their lives will be blown apart as dark truths from the past come to the surface. Can these two women learn to forgive, for the sake of their children...and for themselves?

"This gripping story is ultimately one of redemption."-Library Journal

Praise For Family Pictures: A Novel…

“Family Pictures left me feeling envious of the friends to whom I recommended the book, because they had the prospect of an engrossing story to gobble up in the near future. Green's novels consistently deliver believable, accessible, heartfelt, often heartwarming stories about real people, problems, and feelings.” —Redbook

“Will linger with you after you close the book.” —People

“A riveting story about two women who are strangers until a shocking secret brings them together.” —SheKnows.com

“Explores complex family dynamics with warmth. An inverted fairytale in which happily-ever-after occurs without the prince.” —Kirkus Reviews

“An absorbing read with a gratifying conclusions.” —Booklist

“The women she writes about are believable and likable characters, but their lives are also complicated and rooted in realities that keep them grounded.” —Baltimore Sun

“Bestselling author Green's compelling novel will shock and surprise readers with a startling revelation as surely as it will tug on their heartstrings. Once again she displays her gift for creating characters readers will care about.” —RT Book Reviews (Top Pick)

“Family Pictures is a page-turner with a fire lit to it…Green manages to entertain, while digging into the deep psyches of her characters to uncover the painful truth that lies within us all.” —Woodbury Magazine