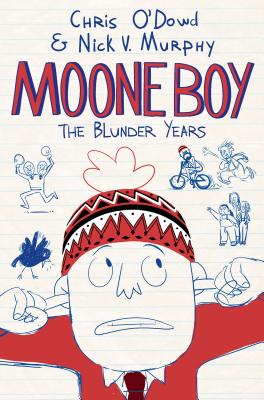 Martin Moone is eleven and completely fed up with being the only boy in a family of girls. He's desperate for a decent wingman to help him navigate his idiotic life. So when best mate Padraic suggests Martin get an imaginary friend—or "IF" for short—he decides to give it a go.
His first attempt is Loopy Lou, a hyperactive goofball who loves writing rubbish rap songs. But Martin soon gets fed up with Lou's loopiness and decides to trade in his IF for someone a little less wacky. Enter Sean "Caution" Murphy, an imaginary office clerk in a bad suit with a passion for laziness and a head full of dodgy jokes. Sean is full of tips and tricks to guide Martin through the perils of the playground, from dealing with his sisters' pranks to besting the bullying Bonner boys. But getting rid of Lou is not that easy, and having TWO imaginary friends is a recipe for trouble!

“The wacky doodles and preteen humor (think fart jokes) makes this an entertaining read for the middle-grade boy set.” —Booklist

Chris O'Dowd is an award-winning actor and writer from the barmy town of Boyle in Ireland. Chris did some good acting in Bridesmaids, The IT Crowd, Gulliver's Travels and Of Mice and Men. We won't mention the films where he did bad acting. He has a dog called Potato and a cat who shouts at him for no reason. He studied at University College Dublin and the London Academy of Music and Dramatic Art. He graduated from neither. Chris created Moone Boy to get revenge on his sisters for putting make-up on him as a child. He co-wrote the Sky TV series and this book with his good friend Nick Murphy, who is a lot older than Chris.

Nick V. Murphy is a writer from Kilkenny, Ireland. (The V. in his name stands for Very.) He went to Trinity College Dublin to study English and History, but spent most of his time doing theater and running away from girls. This was where he bumped into Chris O'Dowd, who was out looking for pizza. After college, Nick focused on writing, which was the laziest career he could think of, as it could even be done while wearing pajamas. He wrote a few things for TV, then a movie called Hideaways, before co-writing a short film with Chris called Capturing Santa. The pajama-wearing pair developed this into the comedy series Moone Boy, which won an International Emmy for Best Comedy.
or
Not Currently Available for Direct Purchase