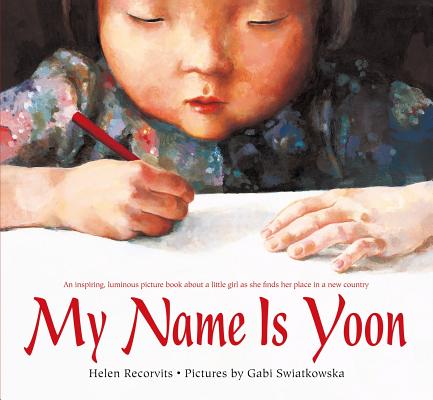 My Name Is Yoon

Getting to feel at home in a new country

Yoon's name means "shining wisdom," and when she writes it in Korean, it looks happy, like dancing figures. But her father tells her that she must learn to write it in English. In English, all the lines and circles stand alone, which is just how Yoon feels in the United States. Yoon isn't sure that she wants to be YOON. At her new school, she tries out different names—maybe CAT or BIRD. Maybe CUPCAKE!

Helen Recorvits's spare and inspiring story about a little girl finding her place in a new country is given luminous pictures filled with surprising vistas and dreamscapes by Gabi Swiatkowska.

My Name Is Yoon is a Bank Street Best Children's Book of the Year.


Praise For My Name Is Yoon…

“* As noteworthy for what it leaves out as for what it includes. . . . Yoon may be new to America, but her feelings as an outsider will be recognizable to all children.” —Publishers Weekly, starred reivew

I grew up in a small city much like the town in Goodbye, Walter Malinski. My grandparents were immigrants from Poland, Russia, and the Ukraine, and my parents were children during the Depression years. Determination and hope got them through those difficult times. Even though they experienced many hardships, they always found something to smile about.

I remember my mother reading to me when I was two years old. My favorite book was about Cinderella. She wore a beautiful pink-and-white gown that looked like a great big birthday cake. I began writing my own stories and sharing them with my cousins when I was eight years old. When I was a teenager, I wrote a weekly column for a local newspaper. Later, I graduated from Rhode Island College with degrees in education and psychology.

Today I live with my husband in the peaceful, woodsy town of Glocester, Rhode Island. I have two grown sons, and I am a second-grade teacher. I love reading and writing stories about interesting characters -- people trying to find their place in life, people with hope in their hearts.