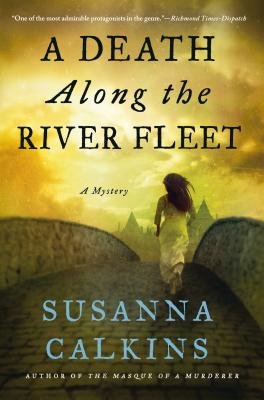 A Death Along the River Fleet

Lucy Campion, a ladies’ maid turned printer’s apprentice in 17th-century London, is crossing Holborn Bridge over the murky waters of the River Fleet one morning when, out of the mist, she sees a specter moving toward her. Frightened at first, Lucy soon realizes the otherworldly figure is in fact a young woman, clearly distraught and clad only in a blood-spattered white nightdress. Barely able to speak, the woman has no memory of who she is or what’s happened to her. The townspeople believe she’s possessed. But Lucy is concerned for the woman’s well-being and takes her to see a physician. When, shockingly, the woman is identified as the daughter of a nobleman, Lucy is asked to temporarily give up her bookselling duties to discreetly serve as the woman’s companion while she remains under the physician’s care.

As the woman slowly recovers, she begins—with Lucy’s help—to reconstruct the terrible events that led her to Holborn Bridge that morning. But when it becomes clear the woman’s safety might still be at risk, Lucy becomes unwillingly privy to a plot with far-reaching social implications, and she’ll have to decide just how far she’s willing to go to protect the young woman in her care.

Susanna Calkins has drawn a richly detailed portrait of a time in history and a young woman struggling against the bounds of her society in her next absorbing Lucy Campion mystery.


Praise For A Death Along the River Fleet: A Mystery (Lucy Campion Mysteries #4)…

“In the wake of the plague and London’s Great Fire, smart, spirited Lucy Campion triumphs once again in this exciting tale of deceit and betrayal. Susanna Calkins transports the reader to 17thcentury London with vibrant characters and details so real you can touch them.” —Alyssa Maxwell on Masque of a Murderer

“Calkins, who holds a doctorate in British history, puts her knowledge to sparking use in this intriguing mystery, which combines a gripping plot with rich historical detail and one of the most admirable protagonists in the genre.” —Richmond Times-Dispatch on From the Charred Remains

“A historical mystery with originality and great attention to detail…The characters are multi-dimensional—including the smart, adventurous Lucy Campion—and the mystery will keep readers turning the pages.” —RT Book Reviews (4 stars) on From the Charred Remains