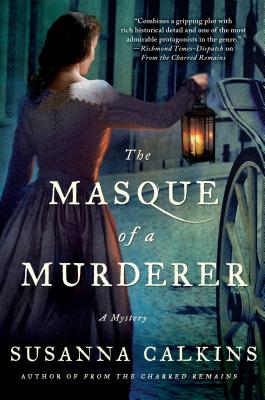 The Masque of a Murderer

In Susanna Calkins's next richly drawn mystery set in 17th century England, Lucy Campion, formerly a ladies' maid in the local magistrate's household, has now found gainful employment as a printer's apprentice. On a freezing winter afternoon in 1667, she accompanies the magistrate's daughter, Sarah, to the home of a severely injured Quaker man to record his dying words, a common practice of the time. The man, having been trampled by a horse and cart the night before, only has a few hours left to live. Lucy scribbles down the Quaker man's last utterances, but she's unprepared for what he reveals to her—that someone deliberately pushed him into the path of the horse, because of a secret he had recently uncovered.

Fearful that Sarah might be traveling in the company of a murderer, Lucy feels compelled to seek the truth, with the help of the magistrate's son, Adam, and the local constable. But delving into the dead man's background might prove more dangerous than any of them had imagined.

In The Masque of a Murderer, Susanna Calkins has once again combined finely wrought characters, a richly detailed historical atmosphere, and a tightly-plotted mystery into a compelling read.


Praise For The Masque of a Murderer: A Mystery (Lucy Campion Mysteries #3)…

“Richly detailed…[Combining] an intricate plot and an amiable, intelligent and courageous heroine, Calkins' debut leaves the reader eagerly anticipating Lucy's next sleuthing adventure in what promises to be a first-rate historical series.” —Richmond Times-Dispatch

“Calkins makes Lucy's efforts to find the [killer] entirely plausible, leading to a nail-biter climax . . . This history-mystery delivers a strong heroine making her way through the social labyrinth of Restoration London.” —Booklist

Susanna Calkins directs faculty initiatives at the Searle Center for Advancing Learning and Teaching at Northwestern University, USA.
Loading...
or
Not Currently Available for Direct Purchase